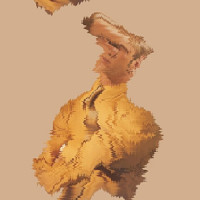 Toy Cars are a band that I've been meaning to get back around to for a while now, and now that I made time, I'm kicking myself for taking so damn long. They're a New Jersey indie/emo act that, if you're familiar with their older sound, feel like they're somewhat reborn, but more or less filled with a proper direction as to where they're heading. Paint Brain is by far and wide the best representation of what they're about and definitely a sign of great things to come; cultivating things in a way that you can sense the fire and restlessness of old is now channeled into maturity and artistic expertise.

The album's sonically diverse and that's a great thing this day and age, especially for bands in this genre(s). From the mid-west emo burn of the self-titled track to the more spacey, shoegaze sounds of "Leaving A/B" and "Cobwebs", they're a hard act to pin down but one that really feels like it belongs on stables like Tiny Engines, 6131 or Topshelf. Matteo Debenedetti's vocals carry on and on like Jon Loudon's (from Restorations) over intricate riffs and musically versatile hooks, giving you something that throws to bands like Signals Midwest, and scenes on the whole like Gainesville or Philly.

"Swim" more or less sums this description up, and proves that Toy Cars are a band to keep an eye on. If you're into mid-tempo, emo jams made for Sunday evening sunsets, this is for you. Hopefully, they rough it and go more aggressive soon because that to me will unlock the next stage in their sonic evolution.