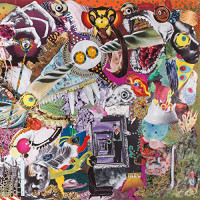 It’s been seven years since the math-rock geniuses of Giraffes? Giraffes! released their last full length Pink Magick. The intervening years have seen the occasional release such as the delightful “SugaaaaaSpazzazazz” and their split with fellow Massachusetts mathletes, Goddard. Now they have returned to a label after a decade, working with Topshelf Records to release their LP Memory Lame.

The sound of Giraffes? Giraffes! has mutated and chafed during their time away from the big record and Memory Lame sees that sound stretch beyond the bounds of their genre to fill the full 40 minutes like a goldfish in a shark tank. Shades of progressive and post-rock find a seat at the table as Joseph Andreoli (guitars/loops) and Kenneth Topham (drums/percussion) weave theatrical bombast and atmospheric cloudbanks of sound throughout their trademark loop-heavy, syncopated riff-alchemy.

Andreoli uses what looks in pictures like 10 square feet of pedals and effects to elicit every possible noise from his guitars, ranging from 8-bit mewls to the creepily out-of-phase seductive tones of a haunted carousel. Topham maintains his underrated brilliance, treating the groove and the listener like a laser pointer and a cat respectively, shifting and jolting the one to see if the other can follow.

Spread out over 6 tracks or 37 chapters, Memory Lame is a step forward for Giraffes?Giraffes! There are even some vocals (kind of). That progress, however, hasn’t come at the expense of the sense of fun that permeates the music that G!G? have always made. You can almost hear the smiles and eye rolls that must have been in the room as two musicians with years of collaboration between them push themselves and each other beyond what few limits their band has.