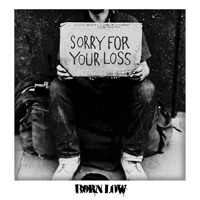 It's been four years since Albany's Born Low released their last recording, 2014's Refuse To Beg. And in the nearly ten years since the band's inception they have yet to release a proper full-length. Until now.

The ten tracks that comprise Sorry For Your Loss are proof of what Born Low fans have known since 2009's Reincarnage: that they are one of the most proficient, dynamic, and slept-on bands in modern hardcore.

Though former label mates with the likes of Trapped Under Ice and Turnstile, Born Low has never enjoyed the hype and accolades that these two, and many of their peers, have justly received. Sure, it doesn't have to be a competition and those aforementioned groups are two of my favorites. But it would be nice to see a band with such a depth of musical know-how and a truly healthy respect for the genre get their turn on the pedestal.

Born Low's past discography consists of a demo, three EP's, and a few comp tracks spread out over a decade. These guys don't like to rush things and this attention to detail is plainly evident in every riff, every drum hit, every vocal bark. Sorry For Your Loss sounds like a record that has been marinating for years: each part of the whole has been tweaked and considered until it's at its most jarring and impactful.

The opening chug of "Evil Lurks" gives off a real "Behind These Walls" vibe - it informs the listener that they're on the cusp of something dangerous. It's the introduction to a melee: a riff that will turn people into drooling animals in a live setting. Born Low rips through the remaining nine tracks in record time, never stopping to catch their breath, never pulling the punch. Most of the tracks stay in the driving, mid-tempo range, but each one manages to pull the listener under at least once with some truly pummeling beatdowns. "Numb To Feel," "Steady Drain," "Burn the Maze," and "King Again" are some of the standouts that will take their place next to Refuse To Beg's assbeater of a finale, "When the Coffin Drops." That being said, with Born Low's dependable reputation for expertly written, metallic-tinged hardcore, there isn't a clunker in the bunch.

The guitar riffs pay homage to some of the greatest axemen in this genre: Matt Henderson, A.J. Novello, and Billy and Bobby from Biohazard. The bass is of the thrumming, clanking chains variety and it's fused directly to some of the most precise and heavy drumming a listener could want. This iron-clad rhythmic backbone gives vocalist Kyle Chard an immovable foundation over which to vent his societal rage in his trademark, throat-shredding howl. More now than ever, Born Low sound like the best parts of Madball, Leeway, and No Warning feeding each other to a pack of wild dogs.

There's a debatably great author that most young people discover during their time spent in the punk rock underground. Though most will eventually find his meandering nonsense tiresome, he did say one thing that has always stuck with me: "Genius might be the ability to say something profound in a simple way." That's good hardcore in a nutshell and this axiom is exemplified by Born Low on their debut full-length Sorry For Your Loss*. Within a simple framework, the band communicates an honest, visceral intensity that is sorely lacking in many of their contemporaries. This is hardcore at its finest.

*At the moment, it appears Sorry For Your Loss is only available digitally from the band themselves. In the past, Born Low released material with Reaper, Bad Ground, and Ratel Records. I don't know if there are physical copies forthcoming so, for the time being, the record can be purchased at the group's Bandcamp page: bornlow.bandcamp.com/album/sorry-for-your-loss.