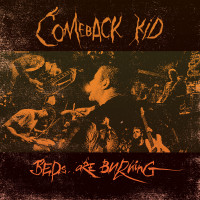 Cover songs have been done to death by punk rock bands. Me First and the Gimme Gimmes have pulled it off, the Punk Goes… series have not and then there is everything in between to various degrees of success. We sure as shit aren’t itching for our favorite artists to cover our parents AM gold or rock songs from teenage angst years gone by. Yet here we are with another cover song by one of today’s most relevant punk rock/hardcore bands.

Australian rock heroes Midnight Oil originally recorded “Beds Are Burning” back in 1987 as a protest song in regards to giving land back to the native people of Australia. The lyrics still hold water in today’s political climate for a variety of plagues upon the world.

Comeback Kid’s take on the song is a fairly straightforward stomper of an anthem. Hardcore flair is eschewed in the chorus for a melodic, ragingly catchy reinterpretation of an already proven earworm. They don’t reinvent the wheel with this one and they’d be fools to try. This isn’t the bands first foray into cover songs. On 2015’s “Rain City Sessions” recording they tackled Nirvana’s “Territorial Pissings” and good lord did they do that song justice. Ferocious.

B-sider, “Little Soldier”, like the A-side, was culled from the bands last full length recording sessions for “Outsider” at Rain City Studios in Vancouver. Singer, Andrew Neufeld, is quoted in an interview with exclaim as saying “I thought (it) might have more legs if we released it as a single as opposed to a track 9 on a full length. It's a bit of a different vibe for Comeback Kid and a song that I had a lot of fun writing.” While it’s true that this song would have been altogether lost on the last record, it seems that there’s a reason it didn’t make the cut. Not a bad song by any means but it lacks the speed and aggression that make CK so passionate and pissed.

Altogether, this limited pressing, Australia tour geared 7-inch is a fun, primarily fan geared outing from a band that continues to dominate years after it’s inception.

Born Low: Sorry For Your Loss