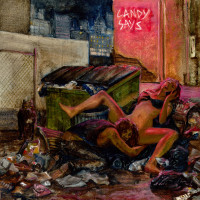 With such an absolutely ridiculous name, skeptical listeners could be forgiven for not giving Richmond, Virginia's Candy a chance. But only for so long. Because if you're a fan of metallic hardcore, you'd do well to check out Candy Says because it's the best hardcore EP - screw it - the best hardcore record of 2017.

A contentious opinion to be sure, what with the likes of Converge, Code Orange, Backtrack (with whom Candy shares members), and goddamn Integrity each releasing an amazing full-length last year. And though I rank Integrity's latest quite high on my best of 2017 list, nothing has blown my brain to the back of my skull like Candy in a long, long time.

Where to start? From the cringe-worthy, Velvet Underground-inspired band name, to the decidedly not work safe cover art, it seems Candy wants you uncomfortable and off balance before you even hear a note of their music. But these tunes. Powerful, raw, filthy, dark, and absolutely frightening. This is music that has the power to make your "normal" friends sick to their stomachs - and I mean that in the best way possible. This shit will put your hackles up and have you looking over your shoulder when you're not banging your head in awe.

Just saying Candy is heavy isn't enough. Sure, I've heard metal bands that are "heavier," but there's a real depth to Candy, as if each chug is tearing away the ground beneath your feet. Musically, the band moves like a single-celled organism: tight, controlled, yet somehow, still barely contained. I tend to gravitate toward strong vocals and in this respect, Candy does not disappoint. Their vocalist's barrage is like a physical thing, a pipe smashing you in the teeth. Even so, you can still hear the venom dripping off of every word.

To this reviewer's ears Candy most closely resembles post-2000 Integrity and some of those groups that fall under Dwid Hellion's "Holy Terror" banner - bands like VVegas and Rot In Hell - though I know of no affiliation between Candy and that camp. However, if we're going that route, the prolific Carlos over at No Echo drew a further comparison between Candy and Japanese bands of the Burning Spirit era - groups like GISM and Judgement (a scene I am not very familiar with).

But one more comparison comes to mind - one not based entirely in sound, but in attitude. Candy reminds me a lot of Gehenna. No, not the Norweigian black metal outfit, but the San Diego hardcore band. Yes, the Infamous Gehenna, the Birth of Vengeance Gehenna. That elusive, Integrity-affiliated mob of punk rock boogeymen led by the nefarious Mike Cheese. Candy has already begun to cultivate a mystique similar to Gehenna's, from their visual presentation, to what seems like a reluctance to play live, to their "it's so metal it's punk" approach to playing hardcore.

I can't recommend Candy Says enough. I haven't been this surprised by a band in a long time. Though musically they're of a different stripe, Candy is punk at its most elemental: barbaric, violent, mysterious, and completely unsafe for mainstream consumption. Get this record.