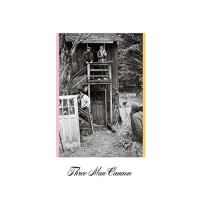 Three Man Cannon return with their latest offering for Lame-O Records following up on 2015’s Will I Know You Then EP. Since their inception, Three Man Cannon have been a staple in the Philadelphia and Scranton indie scene refining their sound opening up for many of the bigger area bands that have recently come out of it. Having previously shared members with Tigers Jaw, their new self-titled effort has Three Man Cannon settling into hazy jams that ooze summer days. It is the most complete realization of the band to date.

This lazy summer day feeling is best exemplified in the back to back of album openers “Sun Poison” and “Building Broken Steps.” Both songs have a lackadaisical economy in delivery and tone. Jangly guitar chords drenched in sun-soaked reverb carry affecting backing vocals as vocalist/guitarist/keyboardist Matt Schimelfenig delivers melodies with a stoner appeal. “Building Broken Steps” begins with a bouncy piano line that holds down the song until the final measures of light cowbell and a surfy guitar riff close out the song. These songs, and similar additions to the album, come across as an emo influenced Kurt Vile.

Three Man Cannon also brings in some 80s post-punk vibes to it. These are particularly noticeable on songs led by drummer and co-vocalist Pat Briar. “Apple Tree” and “Bird” are good examples. “Apple Tree” has Briar turning the snares off on his drums and delivering an ode to freaking the fuck out before a wave of acid washed guitars and keyboards take over the final half of the song. Briar delivers the album highlight with “How A Mouse Could.” The fuzzed out, plodding bass line drives the verses kicking into one of the catchiest choruses on the album with The drummer pondering “so I sit back, relax, behind the stove / think of things I’d do / if you weren’t home / I don’t wanna look up to see her” into ruminations of him as a mouse. The co-vocalists provide a nice contrast throughout the album, sometimes bordering on indistinguishable in delivery, that complement the music and breaks up the monotony of some of the middle section. It’s the moments where they combine both of the aforementioned approaches that really pop and stand out.

Three Man Cannon is filled with trippy piano interludes, fuzzy bass lines, and sun-drenched, hazy guitars. It can straddle the line of easy going and haunting with relative grace never veering too far away from the median. This sounds like a band finding their niche and excelling at it.