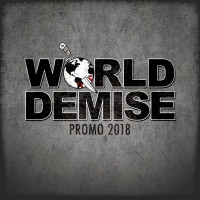 Few hardcore bands over the past decade have enjoyed as much notoriety and attention as both the Mongoloids and Suburban Scum. It isn't necessary to delve into the stories here because anyone who has kept up with the hardcore scene at large since 2008 has heard all the rumors and allegations ad nauseum. Suffice to say, both bands' careers were saturated with drama, something which detracted heavily from their music.

The Mongoloids never seemed to top their debut LP Time Trials and even though I enjoyed Suburban Scum's Internal War and Hanging By A Thread, one particular incident they were involved with made me question if I should continue as a listener.

That's why members of both units coming together, along with members of Manipulate, to form World Demise is such a refreshing thing to see. Hopefully older and wiser, it would be gratifying for something positive to come from this formation. And if the band's promo for their upcoming Straight and Alert release is any indication, so far, so good.

Though just two songs in length, World Demise makes a strong showing for what's to come. Greg Mongo handles the vocals and though his voice can be divisive, with the right music behind it I think it fits perfectly. Such is the case with World Demise. The band crushes these two tracks of brutal, Merauder and All Out War-influenced metallic hardcore. Just the first track, "The Forgotten Ones," trumps anything the Mongoloids have ever done.

Being that this is a promo and not a demo, it's safe to say World Demise's first official release will be of the same high caliber. Hopefully the band will keep making great hardcore and manage to avoid the hype and pitfalls of their previous groups.

The Dwarves: Live in Philadelphia