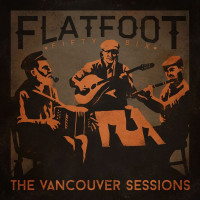 Flatfoot 56 is at their best when they’re exploiting their contrasts. The distorted electric guitar contrasting with the traditional stringed instruments. The fast punk sections contrasting with the slower folk sections. The hoarse shouting contrasting with the vocal melodies. This dynamic is what makes their great records great. By making an acoustic recording, they lose some of that power. Ultimately, The Vancouver Sessions is a ‘don’t forget about us’ EP. Keeping that in mind helps to keep things in perspective.

The Vancouver Sessions is a new five song acoustic offering from Chicago celt-punks Flatfoot 56. It contains one new song, and stripped down versions of four older favorites. The contemplative “Cain” starts things off. Next is the new tune called “How Long”. It’s one of the EP’s more upbeat tracks and features some rapid strumming and a tin whistle. The next two songs are collection’s best. First is the live staple “I Believe It”. (It’s the one that morphs into the old standard/hymn “I’ll Fly Away”.) Next is “Penny” from last year’s wonderful Odd Boat. Here it’s presented as more of a true duet and it’s pretty powerful. “Take Hold Again” wraps things up.

The Vancouver Sessions probably suffers from being a bit of a let down after the career highlight that was Odd Boat. Fortunately, it doesn’t mark a change in direction, just a relatively pleasant diversion. It’s not bad, but it’s certainly less than Flatfoot 56 is capable of. It will appeal mostly to serious fans. On the plus side, it also doubles as a pretty cool collectable. It’s available in three different colors of limited vinyl as a one sided twelve inch with an etched B-side.