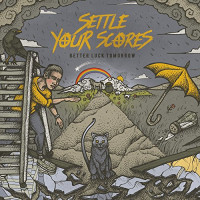 Let’s get this out of the way right from the start...I know that this band probably aren’t going to be exactly flavour of the month with the punk purists. They sit in that little pocket that takes cues primarily from pop-punk with hints at hardcore and occasionally, the radio-friendly rock that so many people find disagreeable. And yet A Day To Remember (and to a lesser extent Four Year Strong and Chunk! No, Captain Chunk!) have built a massively successful career out of it...weird, right?

So that’s what we’re dealing with here. An uplifting, singalong-heavy record that at times wouldn’t feel out of place on a frat comedy soundtrack from the early 00’s. Which might not sound like something you’d be into, but I’ve given it a pretty reductive overview thus far, to be fair. The Cincinnati 5-piece have only dealt in this particular type of ‘popcore’ or ‘easycore’ for a few years, forming in late 2014, so they’re not a legacy hangover from a much-maligned scene from the past, more they’re just a group of guys who really love playing this kind of music and that might be what makes it so charming. The choruses are huge, the pace and production are bright, energetic and jagged - which makes it incredibly infectious as well, it has to be said. There are even distinct moments where the spectre of nu-metal drifts into view, which (again) probably isn’t going to entice that many people these days either, but it all feels like a deliberate decision and the record feels even more fun thanks to all of these tropes and nods to the past and the band's influences.

When you look past those elements though, Better Luck Tomorrow can be best classed as heavy pop punk. Existing at the heavy end of a scene that has been consistently chastised for being too toothless is probably a double-edged sword. Hard to rely on the loyal pop-punk crowd, but will still no doubt be sneered at by fans of heavier music. If we push those potential hang-ups to the side, though, and take the music for what it is, I cannot fault what is being laid down. There’s melody, energy, the band are fantastically tight and punchy and when they want to be, there’s genuine heaviness in the groove-driven breakdowns. In terms of the lyrics, then we’re in standard pop-punk playbook territory largely; “Stuck in the Suburbs” covers the genre staple of arrested development/being bored of your town, album closer “My Reason to Come Back Home” is the obligatory acoustic ballad and “Growing Pains & Throwing Blame” is basically what the title sounds like. However, in comparison to their debut The Wilderness, there are definite flashes of introspection and occasional moments of clear maturation amongst the more typical gang vocals and bombastic early-20’s sloganeering.

Still not convinced? Fine. But just in case you’re interested…later in the record, “Rise / Fall” and “Your Teeth vs. The Pavement” see SYS experiment briefly with a much more distinct hardcore sound. It’s unexpected and the tracks are a little jarring the first time you hear them, but credit where it’s due, I know hardcore bands who would (with maybe a little less sugar in the production) be happy to have songs like this in their arsenal. The vocals, structure, tone and breakdowns are all beefed up massively and I for one think that it’s a pretty impressive display of range from the band.

Look – I’ve written this review on the understanding that it’s a difficult niche that Settle Your Scores are carving for themselves. They’re not entirely alone admittedly, but they’re up against a few huge bands dominating what support there is for this particular scene and beyond that, a wave of popular opinion that is frankly not in their favour. Which is a massive shame, because this record has absolutely won me over. It’s not going to leave you scratching your chin over the structural complexity or the hidden depths in the lyrical content but it just might leave you wondering why you’ve listened to it 3 times in one day in spite of your preconceived notions. All I’d say is give it a go. I think it's great. Come at me.