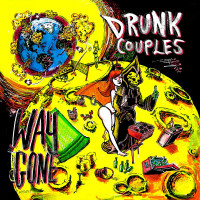 Drunk Couples have been terrorizing the Holy City (Charleston, SC) with a pulverizing sludge-punk hybrid since their eponymous debut in 2015. Their new EP Way Gone was recorded at Gallery 5 in Richmond, VA and engineered by Nate Dominy who also contributed on bass. The band remains core members CJ Deluca on vocals / guitar and Andrew Barnes on drums both of whom also contribute to the band Florida Man. In addition to supplying An Eye for an Eye, the new EP proves that Drunk Couples are definitely lifetime members of the Fiend Club.

Initiating the proceedings with a menacing bass growl, “In My Way” kicks off the EP with the most momentum and gallops in with Deluca’s Viking bellow bringing a thunderous avalanche down the mountainside. In opposition to the driving opener, the other three tracks pull back on the tempo and incorporate some generous plodding sludge. “Up”’s churning bass and mounting guitar riff soundtrack an anthem of defiance against external forces with Deluca howling, “I will pull myself out of this hell / climb my way up.” “Snake Oil” lurches like the Melvins with barrel-chested grunts and rumbles and eventually allows Deluca to switch his vocal to a Danzig-worthy croon on the outro.

“Florio” is the EP highlight, a mammoth march to the sea, culminating in a stomping finale accompanied by some searing guitar torpedoes. The roar is flanked by some “Albatross” worthy riffs as Drunk Couples make their final defiant declaration that “unless God Himself rips off my limbs / I’ll go down swinging.”