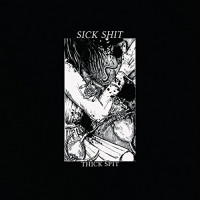 While listening to Thick Spit, a listener could be forgiven for checking the air around their head for dangling insulation or their feet for puddles of spilled beer. That’s how well the recent EP from New Jersey four-piece Sick Shit captures the feel of a DIY hardcore show. Packing five songs into just under nine and a half minutes, Thick Spit bulges at the seams with frantic brutality.

The lyrics evoke a creeping sense of dread, often with a tinge of body horror, that wouldn’t be out of place on a darkwave record. Rather than lose the point in layers of metaphor, the words have a prosaic, Frank O’Hara-style conversational tone. This stands in direct contrast to singer Sami Kaiser’s piercing shriek of a delivery. Strident enough to open the record on its own, Kaiser’s voice benefits even more from the occasional interplay with drummer Zach Miller’s low roar. The lineup, rounded out by the mononymously named Bobko and Anthony Webster on bass and guitar, careens capably from high-speed powerviolence to sludgy breakdowns.

A lot of bands and producers pay lip service to the idea of ‘capturing a live sound’ or ‘the energy of the live performance” on a record. Without having seen Sick Shit live, it’s hard to say for sure, but it’s hard to imagine Thick Spit being far off the mark. It may not be for everyone, (I mean, it’s powerviolence) but this EP is a great soundtrack for someone looking to have a one-person basement show.

The Exbats: I Got the Hots for Charlie Watts