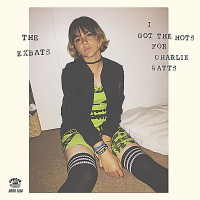 The ExBats bear the rare distinction of being a daddy-daughter band. Pops Kenny McLain is on the guitar and daughter Inez McLain handles drums and vocals. An unusual setup often begats an unusual recording and to its credit, the groups second-ish album, I got the hots for Charlie Watts is a weirder record. Yet, paradoxically, the weirdness is built off classic sounding base.

No doubt, this pair is influenced by garage rock and the early punk scene. “I was in your video,” with its easy goovin’ psychedelic buzz-n-clack could be dropped onto a Nazz record and no one would be the wiser. Opening jam, “2027,” kicks off with a charge and stays at the high velocity for the whole duration, subsisting on the adrenaline snap of the earliest west coat punkers.

Wisely, the group makes Inez’s voice a big focus of the recording- so much so, that sometimes, we reach that Bob Dylan level where the actual music is actually pulled back to supporting pillars- and this is a good thing, mind you. Inez’s voice has an earnest vulnerability that, like mist of us, waivers between being on the retreat and the attack. But even more importantly, she comes at you from an askew perspective.

“Iolaus” tells the tragic tale of the not-quite-so-brotherly love between the titular character and Hercules himself. If you’ve seen Hercules: the Legendary Journeys, you know how hilarious this is. But, whereas many punkers would just make a joke out of this, Inez pushes it further and turns the silly tale into a relatable lament. No easy feat! Kenny too aids in this with his tasteful, jangly guitar to give the track a certain melancholy.

Take a look at “Kill Yr Boyfriend,” which reaches Morrissey levels of selfish shamelessness when recounting jealous. Inez has the courage to play the part of someone realist, rather than someone ideal- which honestly, most bands stick to these days- and its here where the group really rises above other bands flirting with the garage-rock-punk-combo.

Here too, rises another interesting aspect. Inez isn’t shy on detailing sexual issues on the release. “Mr. Bucky” has the lyrics “I wanna fuck Mr. Bucky.” Other jams, like “Kill Yr Boyfriend” have a similar sentiment. Meanwhile, daddy-o is drumming along in the back with a springy delight. Imagine singing sex jams in front of your mom or dad?! Still, Kenny seems like a real-groovy-easy-goin’-realist-kinda guy, so the fact that this is no big deal for him further colors these tracks and makes them something unique.

There band takes a few diversions. “O, Satan,” while an original number, has a honky tonk swing that is as good as most tracks on Hank Williams’ Greatest Hits. Likewise, “I Got Fights” is more 80s alt rock than San Francisco garage, and the band is deftly able tow rap all of it into one cohesive unit. That is to say, this is a band working from their heart, not a reference book, and the uniqueness of it shows. Therefore, it’s not surprising at how off-kilter and slightly-removed this release seems, considering its ingredients. What is surprisingly is how well it all works, and more, how natural it all sounds. Talent really must be hereditary, it seems.