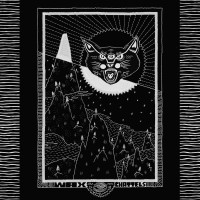 Post-punk noise trio Wax Chattels, self-described as “guitarless guitar music”, are exactly that. Keyboard, bass, and drums comprise the Auckland, New Zealand triad, and there is impressively little room or need for any other components. After releasing a limited 7” of their first single “Stay Disappointed” just three months ago, Wax Chattels are currently promoting their self-titled debut on tour, and it’s frenetic and eerie as hell.

Wax Chattels is a rhythmically complex and demanding release, woven from a series of instrumental effects, hypnotic hooks, and layered sounds. The group’s aesthetic and style are both contemporary and reminiscent of late 70s post-punk, exemplified by lead singer and keyboardist Peter Ruddell’s ability to evoke the gothic baritone of Bauhaus’ Peter Murphy or the strident caprice of Pinkwash’s Joey Doubeck. Bassist and backing vocalist Amanda Cheng commands her instrument and voice with aplomb, channeling the deftness of Steven Severin and the ferocity of Karen O.

Opener “Concrete” denotes Wax Chattels’ math-y approach to timing and syncopation, marked by Tom Leggett’s intricate drumming that subtly rushes the beat for the first three minutes of the song before opening into a cloud of noise along with Ruddell’s sinister keyboard and Cheng’s throbbing bassline. Launching immediately into the fast-paced but alluring “Stay Disappointed” is more frantic bass, heavy and bending, accompanied by a dark and echoing organ.

Wax Chattels can make just as much impact on their more ambling tracks. “Gillian”, an ode to Gillian Anderson of X-Files fame, starts off like a ballad by Massive Attack with both percussion and bass reverberating like a distant heartbeat. The song evolves into the tonal backdrop of a haunted carousel with a ghoulish bouncing rhythm and a spooky duet. The buzzing intro of “Career” evokes a hazy post-apocalyptic desert, pierced by Cheng’s porcelain vocals and the repetition of an uncanny scale on Ruddell’s keyboards. In the song’s epic final minute, the three-piece explode into an atmospheric exposition a la Chelsea Wolfe, beautiful and preternatural.

Wax Chattels displays a raw energy and proficiency that will seamlessly translate into exciting live performances. Every track is a self-aware microcosm, supplied with just the right amount of volume, reverb, and substance to stand out as a triumph of modern post-punk. This electrifying debut will hopefully influence global success for the Kiwi band.

Lizzy Goodman: Meet Me in the Bathroom [Book]