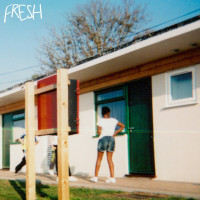 London’s Fresh are a punk rock 3-piece – but that doesn’t really tell the whole story. For a bit of context, Fresh’s sound is in much the same mould as the likes of Chumped & at times, Camp Cope. Honest, confessional lyrics sung with a pleasing cadence & just the right amount of lip-curling brattishness from Kathryn Woods (the singer-songwriter in question). She’s joined on bass & drum duties by George Philips & Dan Goldberg respectively, who each do a very solid job within the remit they’re given.

Woods’ pleasing, unaffected English accent is something of a rarity these days & is notable for it. She also knows which of the punk tropes to hit with song titles such as ‘Fuck my Life’ & ‘Goodbye Suckers’ – but beyond the charm of the delivery, I found it hard to be excited by the record, I’m sad to say. When considering my earlier comparisons, the album doesn’t quite have the grit or punch of Chumped, or the emotional weight & strength of vocal range of Camp Cope. Leaving the record falling slightly flat in some areas.

There is no question that Woods has talent as an artist, and when you consider her references as diverse as MCR, The Story So Far, Bright Eyes & Brand New in ‘Get Bent’, then it’s clear where her influences come from, but also maybe that she’s yet to find her and Fresh’s signature sound. That said, there is definitely enough here to make for a pleasant listen if you’re not looking for something too deep. The record itself clocks in at a brief 11 tracks & 20 minutes in total as well (with 4 tracks under the 90 second mark), so they don’t appear to be trying to make their opus at this stage, in fairness.

Fresh are the kind of sunny, back-porch, occasionally-acoustic punk band that are often born when a young singer-songwriter hooks up with a decent rhythm section. If that sounds like a back-handed compliment, then maybe it is I suppose; but I absolutely don’t wish be dismissive of the potential here. When the real foot-stomping pop-punk kicks in, then I found myself willing it to continue in that vein, but it generally doesn’t for more than a minute or so at a time before moving back towards the less exhilarating, gentle acoustic balladry, which does stunt the momentum somewhat.

On reflection, this is a promising, if occasionally flawed debut from a band who I’m sure will continue to make music & progress in the coming years. With any luck, album 2 or 3 could be something pretty special – but they’re still finding their way at this point.