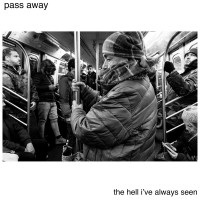 “We’re drinking / we’re smoking / we’re listening / in our shitty, hot rehearsal space / in industrial Brooklyn / that we paid too much for / band practice means getting shitfaced,” goes an acoustic interlude near the end of Pass Away’s new album The Hell I’ve Always Seen. Punk rock wasn’t meant to make anyone famous. At best, stringing together three chords and a shout along chorus was meant to afford one enough cheap beer and pocket drugs to make it through the party. Pass Away completely embody this sensibility on their debut LP.

Consisting of Mike Ireland and Kellen Robson from I Am The Avalanche and Eric Fairchild from Crime In Stereo, Pass Away bring a working-class affability to their Brooklyn inspired punk rock. Having spent ample time touring the world over in the aforementioned bands, The Hell I’ve Always Seen is comprised of the stories spent at home between tours. These include tales of life as an industry bartender, tracking hangovers from your teenage years to your mid-30s, and realizing that hitting those mid-30s sometimes is more about managing the decline rather than the highs. “Call The Guy” has Pass Away asking “is this what getting old is like / just kill me now / let’s crush up some drugs and hang / I’ll be in a bed for a week with a pounding brain.”

Pass Away is a punk rock band through and through. You can hear influences like Jawbreaker and Social Distortion sneak in throughout the album. “Crypt Keeper” has a chorus that wouldn’t sound out of place on Dear You, while “Brooklyn Sky” has acoustic guitars underlining the verses and chorus that culminates in a guitar solo that Mike Ness could appreciate. There’s also an energy on The Hell I’ve Always Seen that would sound familiar to fans of classic New York City hardcore. The double time kick-snare combos and driving low ends on the bass keep the album well-paced and bouncy throughout. The tattooed, heart on your sleeve lyrics are similar to those found on Alkaline Trio’s Goddamnit, especially the randomly placed ‘fucks’ that dot many of the tracks.

The Hell I’ve Always Seen is an incredibly capable punk rock album and doesn’t pretend to be anything else. Clocking in at 30-minutes, it’s replay value is strong. It won’t take long before you’re singing and moshing along with tracks like “Nola” and “Totally Fucked.” It’s clear that Pass Away have a strong future ahead of them touring a dive bar in your town if they can afford to make it out of Brooklyn.