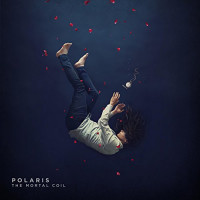 Occasionally, it seems that some people (‘haters’, I believe the current nomenclature to be) are so keen to exercise their self-righteous ‘I told you so’ about a particular scene or genre’s passing, that they look to help bring about it’s demise by loudly & robustly assuring people that it’s already dead. This seems to be the case with Metalcore in a lot of places. Many people will tell you that it was a post-nu-metal movement that died years ago, but scratching a little beneath the surface will tell you this isn’t the case at all.

Hailing from Sydney, Australia, Polaris unapologetically categorise themselves as Metalcore & it would be hard to argue, frankly, as all of the constituent elements are there: vocally, both melodic & hardcore aspects are present & correct – and delivered with extreme confidence & ability by bassist/clean vocalist Jake Steinhauser & frontman Jamie Hails. The soaring choruses contrasting with arpeggiated, reverb-heavy sections, the guitar tone; heavy, punchy, yet not overly distorted, giving a weighty yet almost clipped feel – perfect for the technical, staccato riffing which permeates throughout.

The production job, in short, is superb. It allows the songs to feel clean, but equally heavy, whilst not forfeiting any of the urgency of all the best debuts. This vitality infects the entire album & fuels its songs with rage, intensity & even emotional frailty in the case of ‘Dusk to Day’ which suggests even balladry is not beyond this band.

Where debuts often bristle with exuberance & enthusiasm (certainly true here), this often comes at the cost of refinement, but that’s not something that The Mortal Coil suffers from. On the contrary, it walks a very thin line of remaining direct & at times brutal, whilst always feeling considered & well-crafted. There is certainly no question of the band’s excitement getting the better of them & the album feels full of poise as a result. It’s packed with potential singles & doesn’t really dip in quality at any point.

When searching for negatives, they don’t immediately present themselves, to be honest. Some might argue that the album could be a tiny bit linear in terms of style, and I’m sure they’ll grow lyrically as well, but even that seems churlish when considering the quality of songwriting & composition throughout - and I can only look forward to catching them live (they’re supporting fellow Aussies Parkway Drive on an upcoming tour – but sadly only in their native Australia).

Not only is Metalcore alive, but some of the recent releases that sit within the genre would suggest it’s as well as it’s been in many a year. On this initial effort, Polaris arguably don’t quite reach the levels of more well-established genre-mates (While She Sleeps, Parkway Drive, etc) but then we’ve only seen the first, explosive steps that Polaris have made - and as a statement of intent, The Mortal Coil will make a lot of people sit up & take notice.

Off The Mark: Aging Disgracefully