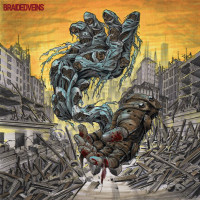 Since their 2013 debut Future/Forever, Flint, MI post-hardcore act braidedveins have eschewed any idea of melodic prologue and gone straight for the bombast. Their latest EP, the succinctly named Counternarratives I: What Did You Do To Survive?, follows suit, diving straight in with a burst of distorted guitar to kick off the opening track “Everything Dies”. The band follows with three songs worth of crunching, post-hardcore guitar riffs, offbeat rhythms, and driving drums layered under Stephen Wisniewski’s post-apocalyptic rantings. Some of the tempos have slowed and gotten heavier than their earlier material, especially the third track “We Become What We Deserve” which ends with a ponderous, hypnotic outro and Wisniewski intoning the EP’s subtitle.

With Counternarratives I braidedveins has captured a sound that is professional and assured. This is a band that has been here before both collectively and individually (members have been in a slew of other bands including The Swellers and Kid Brother Collective) and they know the music they want to make. There are no question marks on this EP; the listener gets the feeling that each riff was exactly what the band wanted it to be. This sound is a solid continuation of their previous records, one that sits comfortably between Fugazi and Refused with frequent nods in the direction of more angular bands like Quicksand or even mid-career Ceremony. Anyone who enjoyed braidedvein’s previous offerings should be satisfied that this EP offers more of the same without feeling stagnant in any way.

The bandcamp version of Counternarratives I wraps up with a cover of the late David Bowie’s “I’m Afraid of Americans”, which leans towards NIN’s interpretation, with a wall of industrial noise joining Wisniewski’s vocals on the chorus. It doesn’t fit seamlessly with the other songs on the record, despite echoing some of the recurring themes of hyper-capitalism and a certain apocalyptic dread. That said, it’s a fine cover and a timely one, both as tribute to Bowie and as a commentary on current events.

Off The Mark: Aging Disgracefully