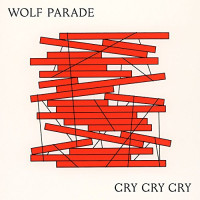 What I've always liked about Wolf Parade is that they've never been a band I could pigeonhole into just one box. They pride themselves with a very unique flair, creating a Montreal dynamic that I can safely say touches lines that Arcade Fire drew. Even if not stylistically, but just by mystique alone. Cry Cry Cry continues the band's evolution into thick, chalky bouts of indie-pop which has the dramatics of Alkaline Trio, the theatricality of AFI and well, a bit of Morrissey here and there. Is it amazing? Maybe not, but it's still pretty good.

Let me get the Morrissey reference out the way first -- "Valley Boy" and "King of Piss and Paper" feel like big tributes with vocalist Spencer Krug stretching himself like never before. The only thing that hurts is the choppy production which makes him sounds like he's bleating more than anything. The accessible jams counter and really hit it out the park though -- with the piano-driven songs like "Lazarus" and synth/dance engines behind tracks like "Artificial Life" and "Baby Blue" really making Cry Cry Cry come alive. And make no mistake, there's a lot to take in here as things get poppy a la Vampire Weekend yet unconventional like The Bravery (a la "Honest Mistake").

Some songs, however, take way too long to kick in, like "Flies on the Sun" for example, where you can tell the band feels torn in a few different directions -- an issue I felt plagued them on their last few records. That aside, I'd love to hear the bangers from this album live. There's an energy here a la Tiger Army which I think will make for an epic stage presence, drawing you in to leave you mesmerized. Let's hope on the next go, they get it even more right. Cry Cry Cry is solid but still feels like potential that wasn't fully harnessed.

Press To MECO: Here's To The Fatigue