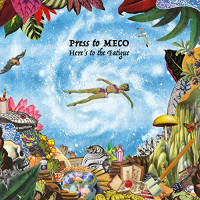 As one of a minority – being one of punknews.org’s British writers, I have the enviable opportunity to introduce various British bands who, thanks to their relatively low profile, might otherwise not really register on the radar of fellow music obsessives on the other side of the Atlantic. Which is something I’m going to do here, I suspect. PTM are a London-based 3-piece formed in 2011 – but from there, the definitive statements get harder to come by…

The band are really not easy to label in terms of genre. This is probably to their credit and given their stated influences including bands as diverse as Sikth, Dillinger Escape Plan, Manchester Orchestra, Michael Jackson and ABBA, maybe not that surprising. There’s certainly a lot going on in their music – enough for debut record Good Intent to be shortlisted for the 2016 AIM Independent album of the year – not bad going for a debut record from a band who don’t sit obviously in any given scene. And why don’t they? Well, they deal in a combination of radio-friendly pop-rock, occasionally jarring time signatures, driving riffs, unusual compositions – and 3-part harmonies. Yup. Every member of the band contributes vocals, and the harmonies they produce are of an astonishing quality. But do you want that when you’re listening to what, at times, pertains to be heavy music?

Well, yeah. I think I do. Not all the time by any means, but I’ve found myself reaching for this record a lot over the last month or so. Certainly a lot more than I’d thought I would. Beyond the near-ubiquitous harmonies, there are incredible hooks (both guitar and vocal) all over this album. At times, the combination of catchy, uplifting tunes with pleasingly chunky guitar lines actually reminds me of From Under the Cork Tree-era Fall Out Boy – which is high praise indeed from someone who absolutely loves that record. Some of the song titles and lyrical content are not completely disparate from Stump, Wentz and co either, it has to be said. The title track particularly feels like something that could have featured maybe on an extended version of Cork Tree. That track is followed immediately by “If All Your Parts Don’t Make A Whole”, which is something of an album highlight with an astonishing range of singalong moments, pounding drums and compositional dexterity.

The album was recorded and produced in Texas, somewhat surprisingly, with Producer ‘Machine’ at the helm – and not that they’ve had a problem in this area in the past, but it really does sound gorgeous. It feels huge (especially for a 3-piece), with a perfect combination of power and sheen that emphasises equally the strength of technical ability and vocal work from guitarist/vocalist Luke Caley, bassist/vocalist Adam Roffey and drummer/vocalist Lewis Williams.

It’s hard to find a great deal of fault with this album to be honest. The vocal approach will not sit well with some listeners and certainly fans of more traditionally heavy music might find it off-putting, but that’s a shame because there are moments of heaviness to be enjoyed (both intro and outro to “A Quick Fix” are particularly enjoyable). But if you’re open to this unique vocal style and PTM’s colourfully diverse approach – and you like a really tangible sense of fun with your music, then this album rips. It’s also really helpful because I can stick it on when my wife is giving me shit about ‘shouty bands’. For the record, I’m not advocating Cannibal Corpse being fronted by a barbershop quartet or anything, but what PTM do makes a lot of sense when you give it a chance. It might end up being too niche for some, but this is impeccably-executed stuff.