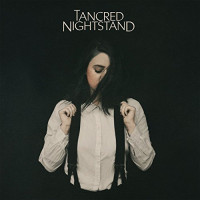 Jess Abbott continues to confidently come into her own as a musician and songwriter with every release under the Tancred moniker. Nightstand, the band’s fourth studio album, is another solid entry in her discography, incorporating some of Abbott’s earlier indie-tinged style with the bolder, more beguiling personality that electrified Out of the Garden. While some of the attributes that made Out of the Garden a tour de force are evident on this latest record, like 90s-soaked guitar tones and solos, there’s an intimacy and vulnerability on Nightstand that pulls the listener into Abbott’s depths more than ever before.

The album opens and closes in a dreamscape. “Song One” and “Rowing” act as bookending reveries with their bucolic, Judy Garland lyricism and hazy instrumentation, an ethereal sound that is a departure for Tancred but executed well. Meanwhile, the body of the record alternates between driving, hook-loaded indie-pop and beautifully downbeat earworms. “Reviews” and “Queen of New York”, the first two singles off of Nightstand, mirror the catchiness and bopping energy from preceding releases but in janglier lo-fi packaging. In these instances Abbott expresses a different facet of her voice, a higher register that maintains her signature rawness but delivers each lyric with purposeful lucidity.

“Clipping” and “Something Else” are contenders for the strongest tracks on the record, strategically nested together in the album’s centerfold like the sweet core of a candy bar. Glimmering and measured, “Clipping” opens with a weaving bassline and roomy percussion that are slashed with a downward glissando, orchestral and compelling. Abbott sings “I’m a loser sometimes / I will lose my mind sometimes” in a stunning melody that feels introspective rather than woeful. “Something Else” enters at a completely different angle, thick and gritty with a garage-rock appeal. The guitar effects and instrumental syncopation are steeped in the nineties, as well as the background ooo’s that fill out the contagious chorus.

Tracks like “Apple Tree Girl” and “Strawberry Selfish” are deceivingly dainty from the outset, their innards murky beneath a wash of indie guitar strumming and tender tempos. On the former, Abbott sings “With a smile you say the world is doomed / If it’s true then let me hold you / Kiss me like a soldier / Kiss me like we’ll never get older” over a swell of stringed instruments, striking a wistful chord. An enticing witchiness pops up in several moments on Nightstand, a stylistic and lyrical approach that echoes the darker edges of Out of the Garden. The addictive chorus on the gorgeously eerie track “Underwear” conjures an image of kissing, swinging demons. “Hot Star”, a fast-paced gem with tones and interludes that evoke Hole’s Celebrity Skin, persistently mentions a card reader’s matrimonial predictions and a gravedigger’s foreboding truth.

Nightstand rhythmically coasts forward and then clambers back almost immediately, a buoyancy that is further reflected in the vibrant melodies and honest lyricism that populate the record. Abbott sings of womanhood and queerness, and how those experiences often come with the ironic dichotomy of isolation and community. The album presents this contrast in both upbeat and somber chapters, a technique that highlights Tancred’s musical growth and acumen.

Press To MECO: Here's To The Fatigue

Courtney Barnett: Tell Me How You Really Feel