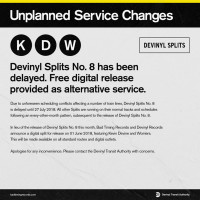 Bad Timing Records, in conjunction with Devinyl Records, has been putting out a series of splits with Kevin Devine called the Devinyl Splits. Each one sees Kevin Devine teamed up with a different artist. This release was supposed to be Devinyl Splits Vol. 8 which would have seen Devine teamed up with the band Petal, but Petal’s split has been delayed. In the meantime, they put out a split between Devine and The Worriers called Unplanned Service Changes, so named because of the last minute replacement of bands and because it’s actually counting as a split released between No. 7 and No. 8. Even the cover art for this split, at least the cover art we were sent with the split, is just some text explaining that the expected split has been delayed.

I loved The Worrier’s album last year, Survival Pop, so I wanted to check it out, even though I, admittedly, don’t know much about Devine’s work. The only connection I have to Kevin Devine was seeing him as one of the two acts for The Get Up Kids’ “farewell tour” back in 2005, the other opener being The Hold Steady who I would develop a lifelong life of starting with that show. Devine’s music wasn’t bad, but was significantly overshadowed by the emotional weight of The Get Up Kids “break up” as well as the outstanding set from The Hold Steady. Still, I wanted to see what the split had to offer.

While both songs are good, I don’t particularly see how they fit together on a split. The Worrier’s stripped down indie punk on their song “No More Bad News” doesn’t particularly mesh well with Kevin Devine’s dreamy, ethereal indie-pop of Kevin Devine’s song “Outstretched & Never-Ending.” This could be a cause of the very last minute swapping out of Petal for The Worriers, in which case it’s certainly understandable. The other seven splits in the series had shared themes for Devine’s songs and his guests songs, and perhaps he didn’t have time to talk to The Worriers about how to make their two songs fit together. Regardless, the two songs on this split are both excellent songs and worth listening to, I just wouldn’t have ever paired them with each other.