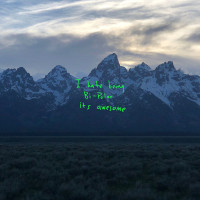 Every great win streak comes to an end. Kanye West made a near perfect seven-album run (Eight, if you count Watch the Throne.) But now there’s Ye—a seven-song, twenty-four minute Wyoming album seemingly recorded up until the moment of release.

Ye, like The Life of Pablo before it, has had its fair share of controversy surrounding it: the MAGA hat, the slavery was a choice comment, "Lift Yourself." However, Kanye’s antics are usually forgiven when the result is an incredible album. That is not the case here.

Which is unfortunate because Kanye shines a light on mental health. “I Thought About Killing You” opens the album killing the titular, unnamed “you.” He talks about loving himself yet still having thoughts about killing himself. The album cover shows Wyoming mountains (apparently taken on his way to the album release party) with the words “I hate being Bi-Polar its awesome” (his spelling). On “Yikes” he claims that bipolarity is his super power, something hard to argue with. For someone as famous and controversial as Kanye, it’s still hard not to root for him. His influence on pop culture is clear with each release. But Ye doesn’t feel like that reinvention. If anything, this album feels safe, a word I imagine is insulting to the artist.

However, Kanye has an incredible ear for production, more apparent on Pusha T’s DAYTONA. There are some excellent moments on Ye, but with only twenty-four minutes of music, some doesn’t cut it. His song about Kim Kardashian not leaving him feels the closest to the emotional standard he thought this album was. The same can’t be said for “Violent Crimes,” the ode to his daughter North. Here he acknowledges his treatment of women contrasting it with having a daughter (similar to Nas with “Daughters.”) But then he worries about himself getting #metoo-ed and you wonder what actually he's trying to say.

If there’s one great thing to come out of Ye, it’s the appearance of 070 Shake, the most recent G.O.O.D. Music signee. She appears in the outro of “Ghost Town” and the hook of “Violent Crimes.” The former shows Kanye still knows how to use collaboration to his advantage.

But Kanye West is now a forty-year-old father of three. Maybe it’s unfair to ask him to continually reinvent himself yet he keeps assuring us that he is the greatest alive. He has a collaborative album with Kid Cudi coming out Friday. Then he’s producing a new Nas and a new Teyana Taylor album in the subsequent weeks. So don’t write him off yet. Collaboration has always inspired Kanye and maybe, now, that’s where we’ll find his greatest accomplishments.

Brick By Brick: Thin the Herd

Rule Them All: An Alignment of Polarity