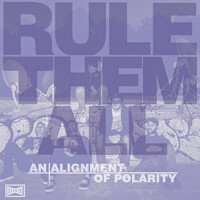 I reviewed Rule Them All’s demo release just a few short months ago. And now they’re back with their first proper release. Their new EP, An Alignment of Polarity, has just been digitally released with a vinyl release forthcoming in cooperation with A New Morality Zine.

This new EP picks up where their demo left off, and pushes Rule Them All’s sound into more refined and confident arenas. The first song, “Higgs Boson,” itself a wonderfully nerdy reference to theoretical physics, opens the EP with energy and precision. In fact, it sets a good tone for the release as a whole by offering up the catchy hook-laden melodic hardcore that Rule Them All play. The chorus and bridge parts stand out as the guitars offer crunching and bending riffs while Jon Gusman balances a vocal style that plays on a shouting-talking style that actually reminds me of Bane with a little less aggressiveness and a bit more melodic sensibility. Gusman's lyrics on "Higgs Boson," and the entire EP, are introspective and thought-provoking. In fact, his lyrics are one of my favorite components of the EP overall. They seem to fit the songs in both cadence and sound. Not an easy feat.

“Sad to Die,” the third song on the EP, brings out a great mid-tempo Dag Nasty-inspired vibe. Lyrically, the song delves into the trappings of workaday life with a contemplative twist. The tempo picks up into a speedier chugging bridge and closure that moves with melodic moshability that is more than enough to satisfy fans of heavier hardcore as well as the more indie-minded listener.

The final track on An Alignment of Polarity, “(Error: Trial) So It Starts…” punches as the most aggressive song on the release. Don’t be fooled though. The song still avoids any necessarily heavy hardcore riffage. What is does have are verse riffs that crunch and chug with speedy melody, and that are anchored by popping drum beats. The chorus moves along with high-paced singalongs and melodies that are impressive for a band who’s on their first proper release. The guitar work in the song is similarly impressive, as both guitarists offer complementary leads and riffs that serve to give the song a strong dimensionality.

Frankly, Rule Them All have a very high ceiling as a band. Their style is palatable enough that I bet they find themselves playing on shows with bands both heavy and melodic. Their crossover appeal on An Alignment of Polarity is well-deserved too. They’ve written a very strong EP that draws on the more intelligent and sensible aspects of the hardcore underground. With the modern twist they’ve thrown into the sound, Rule Them All have offered us an extremely impressive, cohesive, and thoughtful release. An Alignment of Polarity truly deserves to be on everyone’s radar as one of the strongest releases of 2018 thus far.