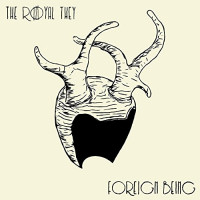 The Royal They are a ferocious Brooklyn trio creating a prescient racket, harnessing the sounds of Rid of Me-era PJ Harvey and the Dischord roster with lyrical content that speaks to the current cultural climate. With Foreign Beings, The Royal They have positioned themselves as next generation heir apparent to the throne abdicated by Sleater-Kinney following The Woods (not to be taken as a slight to No Cities to Love). With a logo that recalls a rotated adaptation of the classic Husker Du emblem, the band’s breadth of influences has been expertly refined across this album for a provocative statement of purpose and manifestation of their strengths.

“C.N.T.” is the initial opening shot with aim toward the current culture war raging along gender lines. “Am I a person or a piece of meat?” lead singer Michelle Hutt spits over a power chord sprint that abruptly brakes into a slow build, recounting the “vitriol of the unevolved” and lamenting “there’s no counter, no cure” but defiantly stating “you’ll try to fuck the world / but you will not fuck me.” “Leech” opens with barreling drum rolls and dashes to charge that its subject can “justify anything / [but that] doesn’t make it sane.” The vocal fragility in “Pandemic” wonders “what will these / children think of me?” and starkly contrasts the descending chaos when the guitars blast in. Hutt’s sterling vocal performance throughout the album transmits her content clearly and ranges from soft delicacy to fervent howl.

The Royal They embody the most exciting distillation of independent music’s influence over the past 30 years into something vital and reactionary to the existing American climate. Across the album, the band proves themselves masters of dynamic tempo and volume shifts to maximum effect. In addition to female progenitors like Fire Party, The Royal They’s newest album also recalls flashes of In Utero-era Nirvana with their dynamic sonorous gyrations. “Say Less” recalls Charly Bliss’s buoyant indie bounce, while the percussive rim rolls of “Veritas” recall Fugazi’s “Reprovisional” slowed to a crawl with Hutt declaring “I will die / when I die / I get by.” “Flying Naked” is a masterclass in tension building with subtle pick scrapings and a pensive guitar line exploding in the back half to a shredding climax.

The exuberant “Weekender” is the barreling finale to this excellent album. “Hell yes, now I have what I came for,” Hutt proclaims, insisting “I know now what I want to believe in…I’m where I want to be right now.” On the preceding “Gullethead,” the dialogue to reparations is opened with “I’m still listening / If you have anything to say.” It’s an exciting prelude to the future of this band and hopefully our communal future as women continue to take momentous strides toward equality against a pervasive patriarchal society.