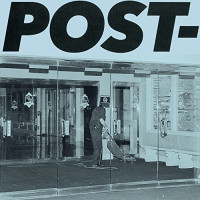 When asked about his seemingly negative view on the world and the lack of hope he has for it, the journalist Ta-Nehisi Coates says, “resistance is its own reward.” That sentiment seems to be all over Jeff Rosenstock’s New Year’s Day surprise album, POST-. From the opening track cry of “I fought the law but the law was cheating” to the album’s closing line “We won’t let them win, fuck no”, this is an album of struggle. Of battling and not having fun doing so, of struggling with the knowledge you won’t win. But that doesn’t mean you have to just let the other side have the victory without fighting for it.

Rosenstock has always had a more serious outlook that it would seem from the surface. I think that’s what made Bomb the Music Industry resonate with so many people, the dichotomy between how undeniably fun they were and how somber many of the songs were when you really thought about it. But he’s a long way from the joy of songs like “I Don’t Love You Anymore” or the carefree beach vibes of “Can’t Complain”. This is maybe the most pessimistic a Jeff Rosenstock album has ever been, but the genius of his songwriting is that even at its darkest, you still can’t help but image huge crowds at FEST drunkenly singing along to every word.

I’ve always thought of Jeff Rosenstock as this generation’s Fugazi. They both have that DIY work ethic and commitment to doing things their way at any cost. And they both are always consistent. POST- continues that trend. It’s another fantastic record from Rosenstock, but what else would you expect? Through twenty years and all kinds of different projects, the dude has put out banger after banger after banger. At this point you kind of know what you’re getting from a Jeff Rosenstock record, but that’s not a bad thing. It speaks to the quality of what he does.

The best songs on POST-, though, are the ones where he steps a bit outside his comfort zone. The middle of “USA” and intro of “TV Stars” have strong Beach Boys vibes. My favorite song on the album, the 11 minute closer “Let Them Win” closes with five minutes of beautiful synth noise that wouldn’t be out of place on a Brian Eno record. On first listen I kept expecting it to kick into that one last chorus, and I think by ending the record with this lush soundscape he threw the biggest curveball he could. There’s a lot of anxiety and stress in POST-, but the last few minutes make you think maybe there’s more beauty in going through all of it. You just can’t see it till the end.

The Royal They: Foreign Beings