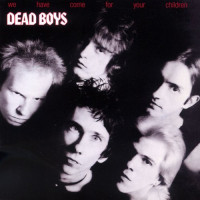 Dead Boys’ second album has been one of the most maligned records in the entire punk lexicon. Forty years later, it’s time to give We Have Come For Your Children a fresh listen. Their 1977 debut, Young, Loud and Snotty, is among the handful of greatest punk albums ever made. Few would even try to deny it. Following it up was going to be a problem. Sire, Dead Boys record label, was convinced the band had commercial potential. It’s ironic that the band’s ability to write a catchy rock song was ultimately a big part of what led to their demise.

To help insure mainstream success, the record company brought in Felix Pappalardi to produce We Have Come For Your Children. Pappalardi was best known as the bassist for the hard rock band Mountain, but also had a fairly distinguished career as a producer. His job was to reign in the Dead Boys and soften up some of their rough edges. Unfortunately, he was successful. As a matter of fact, he was so successful that he ruined a lot of what was great about the New York via Cleveland quintet.

The production was bad, (too polished), there’s no debating it. If you can look past that, We Have Come For Your Children had was full of gems. Based on songs alone, it wasn’t all that far behind Young, Loud and Snotty. Album closer “Ain’t It Fun” is probably the band’s best known song after “Sonic Reducer”. It’s a dark classic about living dangerously. Even though singer Stiv Bators wouldn’t die until more than a decade later, it’s hard to hear the song and not think of him.

Opener “Third Generation Nation” was another classic. “I Won’t Look Back” was about as catchy as anything the band ever did. “(I Don’t Wanna Be No) Catholic Boy” was a fan favorite. “Flame Thrower Love” had a riff that could stand up against Dead Boys’ best work. “Son of Sam” was yet another classic. It would have been right at home on Y, L and S. “Tell Me”, “Big City”, “Calling on You” and “Dead and Alive”. On and on it went, all great songs. You should really listen to a Dead Boys live album from this era. (Night of the Living Dead Boys is a good choice.) The WHCFYC songs are mixed with the Y,L and S songs and have a similar power. It gives you an idea of what this album could have been. What it should have been. Dead Boys were so unhappy with this record that it contributed heavily to their premature breakup. Maybe it’s finally time for a proper remix.