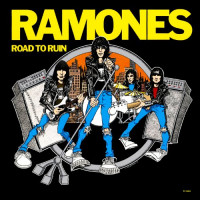 In just two years The Ramones blasted out into the very young punk scene with the release of what would later be considered absolute classic albums. By 1978 a major change happened to the band. Tommy Ramone decided not to be the band’s drummer anymore, but still stick around to produce their next record. Marky Ramone was then brought on board and would be the band’s drummer for the majority of the band’s career (yes, with exceptions later on).

Tommy leaving the band was not the only change that happened to the band in 1978. Their fourth album Road To Ruin also captured The Ramones in a bit of an experimental faze. They didn’t stray too far from their sound that they solidified on their self-titled album, Leave Home and Rocket To Russia, but there were some very noticeable additions that were made -- mainly they softened their sound a bit with tracks like “Don’t Come Close” and “Needles And Pins.” “Don’t Come Close” was probably on the opposite side of The Ramones’ musical spectrum from say, tunes like “Judy Is A Punk” and “Blitzkrieg Bop.” Surprisingly, the band didn’t just stick to a few power chords. There was an actual main guitar lick that started it off and the rhythm section seemed to have even included an acoustic guitar. “Don’t Come Close” was very 60’s sounding tune from the gentler musicianship lines like, “You got everything at home/Kisses out of desperation/Bring you more aggravation.” “Needles And Pins,” which was a Searchers cover (written by Jack Nitzche and Sonny Bono) was a love ballad and a definite straying away from The Ramones’ bare bones, early punk sound. Between the acoustic guitar work, Joey’s cleaner, more melodic vocals and just by picking such a song to cover, it was pretty clear that The Ramones set out to do sometime different on this album.

But Road To Ruin did contain its share of The Ramones’ hard-hitting punk tunes. Just like the three albums before this one, The Ramones stuck to their classic style of song writing. “I Don’t Want You” had a simple, but catchy chord progression with simple, rejection-filled lyrics. “I’m Against It” was just a list of the band hated like politics, communists, Burger King and even “anything.” The crown jewel of Road To Ruin was clearly “I Wanna Be Sedated,” not just for its insanely upbeat, catchy vocals and sliding guitar riff, but in the context of this album is does encapsulate everything band set out to do, which seemed to be, “experiment a little, but don’t stray too far from the original sound.” “I Wanna Be Sedated” had the band’s “I Wanna…” lyrics and Johnny’s signature guitar playing, but they added a bit more on top of all of that. The hand clapping and higher-pitched guitar riff (which was pretty rare to find anywhere else in their discography) that is played after the chorus made it one of the band’s most popular and most approachable tunes.

Road To Ruin was an album where The Ramones set out to try some new things with their music. If they had done the same thing like they did with the previous three albums, then things would have probably gone down hill in terms of their music career. This album was significant because they dared to change things up a bit and for the most part it actually worked out quite well. Hearing the softer side of The Ramones was not something fans would have expected for the most part. You could tell that the more intense songs were written from a place of greater confidence both lyrically and musically. There was no doubt that the first three albums were absolute classics. Fans would argue as to which one was the best of the three for decades to come. Road To Ruin does not place far behind them at all.

Dead Boys: We Have Come For Your Children