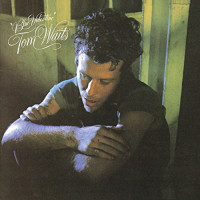 From 1973 through 1977, Tom Waits released five studio albums on Asylum Records (yes, Nighthawks was a studio album). Despite not having any sort of hit song worthy of radio play or charts, Asylum continued to give Waits’ free range artistically; no small gesture in those days. Still, Waits’ himself rightfully felt that such a hit was due. That, along with the five years of requisite touring cycles, had him feeling in a bit of a predictable rut by the summer of 1978.

40 years later, no present day fan of Tom Waits would ever dream of uttering the word “predictable” when describing Waits. But when Blue Valentine was released in the fall of 1978, many people thought that the great neo-Beat had become just that. Some listeners felt they had already met the late hoodlum of “Romeo Is Bleeding” the previous year on the title track of Small Change, or that the closer “Blue Valentines” was a more honest retelling of “Martha”, one of the high points on his tender and understated debut Closing Time.

But despite such nitpicking, it wouldn’t be fair to classify Blue Valentine as ill received, nor as predictable. There was in fact some new ground broken. The earlier records were largely based around the piano, with sprinkles of soft strings and horns. Here, however, Waits held back on all that jazz. Instead, he did a much more blues oriented sound, with more electric guitar than ever, and allowing his gravelized voice to soar, rather than attempt to subdue it. I wouldn’t exactly call it his Newport moment, but when placed in the Tom Waits timeline (immediately preceding Heartattack And Vine, the fully electric raging blues-rock record, as well as the last straw for the Asylum execs), Blue Valentine is certainly a significant place marker.

Additionally, Waits’ tweaked his lyrical approach on Blue Valentine, as least when it came to perspective. On the previous records, Waits usually took on the persona of the main character of the song. While there’s nothing wrong with that from a storytelling standpoint, what can sometimes be missed is a sense of intimacy with the songwriter.

Case in point, Tom has often cited Frank Sinatra’s In The Wee Small Hours as his personal all-time favorite album. A timeless classic and a masterful work, to be sure. But for all of its glorious, melancholy brilliance, the one thing that’s lacking is the view from another room. So on Blue Valentine, Waits methodically and unselfishly examined his characters and laid out the stories in whichever manner would best engage the audience. Especially noteworthy to this point is the opening track “Somewhere (From ‘West Side Story’)”, Waits’ first recorded cover song. Not to be dismissed as a corny showtune, Waits’ had the cunning to recognize its narrative, of desperate lovers clinging to their last shred of hope, as perfectly suited for his world of nighthawks and rain dogs. Even in this very rare instance of using a cover, Waits always does what’s best for the story. Going forward, the wary observer on “Red Shoes By the Drugstore” doesn’t necessarily exist in the same universe as the nostalgic troublemaker on “Kentucky Avenue”, and that’s a dynamic that we really hadn’t seen on his earlier work.

Perhaps the best track of the album is “Christmas Card From A Hooker In Minneapolis.” The reason this track stands out not only on the album but also near the top of Waits’ entire catalogue, is the way that it culminated all of the best tools in Waits’ songwriting toolbox. His characters are so often muddied, lonely fools, stripped of their dignity by society. Yet Waits never closes the door on them completely. The next paycheck, the next pretty girl, the next town over, something better is usually within reach.

In “Christmas Card”, the titular hooker begins her letter by putting the hope first. She’s happy, she’s expecting, she has a wonderful marriage, and has left the past behind. After waxing sentimental about the good old days, we learn that there is no dream husband, no newfound permanence; just another brush with the law and unpaid legal bills. The theory here is that the facade early in the letter was no icebreaker. It was the life she chose for herself. It was, in a way, reality. But as in so many of Waits’ songs and as in life itself, circumstance is a killer. Life happened while she was finding her husband and baby and home, and now if she could just borrow a little dough to get over this one last hurdle, her dreams are waiting for her, nearly within reach. These same themes and methods show up in so much of Waits’ work, it’s difficult to fully dissect the importance of this track.

Blue Valentine is not always considered a Tom Waits staple. It doesn’t receive the same landmark designation as Heart Of Saturday Night or Rain Dogs or even Mule Variations. But what is thought of as space filler by a few, is easily discovered to be important groundwork by the lucky. A wonderful mix of the culmination of the old and the roots of the new, Blue Valentine is an essential album in the beautiful cacophony that is the discography of Tom Waits.

Siouxsie and the Banshees: The Scream