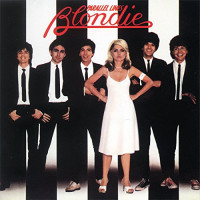 Blondie has been written off by some punk fans and critics over the years for being the most pop of the bands to come out of the original CBGB crowd, for dabbling in disco (we’ll get to that in more depth later), and the fact that, a few years into their career, they would be more closely associated with punk’s offshoot genre, new wave, than punk itself. But to claim that early Blondie wasn’t a punk band, and an important part of the New York punk scene at that, is laughable. Blondie’s first two albums have been described as 50’s style girl-group pop music throwback with a little bit of a punk edge, which is accurate, if a little bit of an oversimplification. Songs like “X Offender” and “Rip Her to Shreds” remain punk rock classics to this day. But Blondie’s third album, Parallel Lines, was basically their London Calling, in that—even though Blondie never reached the artistic depth of The Clash—much like The Clash, after two albums of a pretty basic punk style with a touch of other genres mixed in, for their third album they branched out into a more eclectic sound, pulling from the traditional 50’s pop they were known for, early new wave influences, power pop, early R&B, reggae, and even disco (again, we’ll get to that).

1978 was a banner year for Blondie, as Parallel Lines was actually the second of two albums they put out that year, the first being Plastic Letters which came out in February that year. (I’ve never quite been able to figure out if there’s any significance to the two albums having the same initials, PL.) How they churned out not only a second album in the same year, but an album as brilliant and complex as Parallel Lines, honestly boggles my mind, but I think a lot of it had to do with Mike Chapman. Blondie’s first two albums had been produced by Richard Gottehrer, but after meeting Australian producer Mike Chapman while touring California, their manager arranged for him to produce their next album. Chapman considered the band to be uniquely untalented musically (with the exception of Frank Infante who he thought was a very talented guitar player). Chapman dedicated a lot of time to improving the band’s technical skill, which a lot of the band resented. Bassist Nigel Harrison got mad at Chapman and threw a keyboard at him in the studio during the recording session, which is funny to me because he was angry enough to throw an instrument, but not considerate enough to throw his own instrument. But some of the best albums in history have stories of unyielding producers behind them, and Parallel Lines is no exception. Nobody’s ever relayed any stories of Chapman being abusive in his methods. It was simply that Chapman was the first one to really try to whip the band into shape, and, even if Blondie wasn’t happy about that, it was successful because Chapman’s forceful approach yielded Blondie’s best album in their entire catalogue.

The album starts with “Hanging on the Telephone,” a cover by a band that was so obscure that people often mistake the song for a Blondie original. “Hanging on the Telephone” was originally a song by The Nerves, a band that lasted for four years from 1974 to 1987, and who put out one four-song EP in their entire, short-lived career. The original version of the song isn’t too hard to find and, aside from the obvious change of going from a male to a female singer—which gives a song about obsessively and desperately calling a love interest over and over again a little less of a creepy stalker vibe—there’s also the huge change of going from a band with three musicians to a band with five. The keyboards and second guitar that Blondie add into the song really fill out the song more compared to the Nerves original.

Speaking of stalker vibes, “One Way or Another” immediately follows “Hanging on the Telephone” and seems to continue a theme. I think this song often falls into the category of songs like The Police’s “Every Breath You Take” that are meant as dark songs about deeply unhealthy and obsessive people, and are often mistaken for love songs. “One Way or Another” was written by Harry about an abusive ex-boyfriend who ended up stalking her. It should be obvious considering the last verse switching from the stalker’s perspective to the stalkee’s, changing it from “One way or another I’m gonna catch you” to “One way or another I’m gonna lose you.” The song’s slick power chords create some powerful pop hooks that cover up the fact that the underlying beat of the song is actually more country-western than punk. Add in Debbie Harry’s brilliant voice, which sounds downright unhinged in this song, and the final bridge of Harry’s gibberish word salad lyrics, written pretty much on the spot, talking about such bizarre things as supermarket specials on “rat food,” and you have a very strange but very fun Blondie classic.

What I love about track three, “Picture This,” is that it embodies most what makes this album great: the fact that Debbie Harry’s lyrics are somehow bursting with girl power and dripping with vulnerability at the same time, as evidenced by the intimately sexual line of “I will give you my finest hour/The one I spent watching you shower.” “Picture This” is the first song to take a mellower, yet still bright and poppy, tone on the album. It’s basically where you can see the band slipping into a more new wave style. By far my favorite deep cut/non-single on this album is “11:59,” a song written by keyboardist Jimmy Destri about the New York club scene, but it’s also about more than that. The refrain “It’s 11:59 and I want to stay alive” ties in a powerful theme about fleeting youth, the temporary nature of life itself, and the desperation to find joy while you still can.

Okay, it’s time to talk about the elephant in the room, which is of course “Heart of Glass.” The song was Blondie’s biggest breakthrough hit that rocketed them from cult New York band to international sensation. Of course, it was seen as a betrayal by many because punk rock and new wave, not to mention rock music as a whole, was rebelling against the disco fad which was very commercially successful. The song was actually one of the first that Blondie ever wrote, but while they liked the song, they felt it was missing something. If you listen to the deluxe edition of Plastic Letters, you can hear an early demo recording of the song called “Once I Had a Love,” so named because the words “heart of glass” would only be added into the song later to replace the repeated use of the phrase “pain in the ass” that would have kept them off the radio. The demo version has a bit of a disco beat, and was sometimes referred to as “The Disco Song” by the band, but overall it had more of a laid back punk/reggae vibe to it. The song was brought back out when the band was playing their songs for Chapman and he finally asked if they had anything more, and they pulled out the old song, saying that they didn’t know how to finish it. Chapman, impressed by the song, would bring in a then state-of-the-art drum machine to help make the song a slicker disco song. The members of Blondie would describe the process of programming the drum machine and recording the song as a “nightmare” because what they were trying to do with the song was basically beyond the technology available at the time. Blondie, today, says that they always meant for the song to be a sort of tongue-in-cheek parody of disco instead of a straight disco song. This really sounds like justifying the song after the fact more than anything, because the band gives no indication on the track that anything isn’t supposed to be taken seriously. They do add rock elements into the song, most notably the combination of the drum machine and actual drums, something disco never does, making it one of the first disco fusion songs. But that blending never makes the song feel like a parody. While “Heart of Glass” may be an affront to the punk ethos, you could also argue that it’s a uniquely punk action to do something that so brazenly flies in the face of punk standards.

I would love to have been a fly on the wall when the suits at the record label picked out which songs to release as singles, because I imagine they must have been completely tone deaf, or else simply picked out songs by putting them all up on a board and throwing a dart at them. The first single was “Picture This,” which, as I said, is a great song, but the softer, mellower sound doesn’t lend itself to a big chart buster, and the song only managed to chart in the UK. This was followed by their cover of Buddy Holly’s “I’m Gonna Love You Too” which was good, but was a retro pastiche with little mass appeal that fared even worse than “Picture This.” Third they finally released “Hanging on the Telephone,” which I would have released first, which was a little more well received than the first two. Finally, their biggest hit to that point, “Heart of Glass,” wasn’t released until the fourth single. Then came “Sunday Girl,” one of the less remarkable songs on the album. And finally “One Way or Another,” one of their most iconic songs that can still be heard in commercials to this day, was released as the sixth single. I’m not sure Chrysalis Records ever fully understood Blondie, as evidenced by the mod style cover the album, which every male member of the band absolutely hated. But somehow they knew what they were doing when they sent Mike Chapman to get the band in line and produce a really high quality record with a band that had some latent talent but really needed discipline. Chapman would produce the rest of the band’s albums until their breakup in 1982. While 1979’s Eat to the Beat can largely be seen as a continuation of what the band started on Parallel Lines, the turn of the 80’s pretty much marked the end of the band’s quality music production, as their two albums of the 1980’s, Autoamerican and The Hunter were overly pretentious and poorly thought out concept albums. And, since their 1997 reunion, they’ve only put out a few good songs here and there, without ever producing a whole album worth listening to. But Blondie in the 1970’s were one of the best pop-punk/new wave bands to ever grace the scene, and Parallel Lines remains their crowning achievement.

The Nipple Erectors: King of the Bop [7-inch]