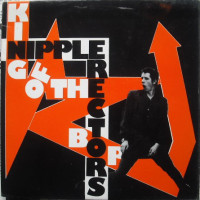 Before starting The Pogues, Shane MacGowan traversed the underground London punk scene as Shane O’Hooligan and played in a short lived punkabilly group called The Nipple Erectors. At the time, MacGowan was a fixture on the scene who became the face of the underground through a bloodied picture in the November 1976 edition of New Musical Express. The headline of the article was “Cannibalism At Clash Gig”, which propagated the rumor that Shane had his ear bitten off, though the singer would later debunk the myth in an interview. Either way, MacGowan was already somewhat famous when The Nipple Erectors recorded their first single “King of the Bop” backed with “Nervous Wreck”, which was released on Soho Records in June of 1978. The band reluctantly changed their name to The Nips after this single.

The A-side of the 45 was a jangly, garage-infused tune with hints of surf rock and doo wop. Musically, the bass took the audible forefront with constant walks up and down the scale, while the guitar, with very little distortion, stayed in the distance except when the lead riff kicked in about halfway through the 2-minute song. The lyrics were somewhat adolescent and the vocals were raw, but that’s what made this track somewhat of a hidden gem.

On the flip side, “Nervous Wreck” had more of a punk sound than the A-side. It had a similar feel and the vocals are just as raw, yet there was a bit more inflection in MacGowan’s voice. Group vocals and a bit of harmony during the chorus added to the dynamics of the song. The B-side definitely seemed to be more influenced by the burgeoning English punk scene via The Damned, The Clash, and The Sex Pistols.

It’s difficult to predict if these songs would garner any attention without the legacy of Shane MacGowan. On their own, they were pretty good tunes that combined a vast number of influences from the ‘60s and ‘70s. But with MacGowan’s legacy, they became something more. They were an innocent starting point that barely scratched the surface of what was yet to come. They were great snapshots of a world on the brink of something special.