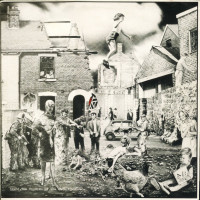 “No Elvis, Beatles, or the Rolling Stones in 1977!” the Clash famously chanted, looking to destroy icons, dinosaurs, and the concept of “heroes” itself. Well, be careful what you wish for because the very next year came a band of young upstarts (with one of the “young upstarts” being an older hippie) who set their sites on the Clash and aimed to do the very same thing.

Whereas the Clash had always favored a melodic, essentially pop sound, Crass, led by vocalist Steve Ignorant, a young punk looking to cause a ruckus, and Penny Rimbaud, one of the last remaining hippies who saw an opening to expand this thing called “punk,” embraced the abrasive through their landmark album The Feeding of the 5,000. Opening track, “Asylum,” (which was so nasty it was removed from the initial pressing) found Eve Libertine mocking Jesus against a cacophonic bed of anti-music that sounded like the combination if industrial machinery and helicopters crashing. Crass seemed to say, “you want rebellion? This is true rebellion.”

And just as the album opened with its brutal, non-music soundclash, the band countered that while they were unafraid of sonic assault, they could write a tune as snappy as the so called “punks” who had no qualms signing to major labels. “Do they Owe Us a Living?” which was built up from a poem about killing chickens, found vocalist Steve Ignorant chanting a broad and somewhat ambiguous attack on capitalism itself while Crass established their trademark sound- Penny Rimbaud’s iconic pitta-pat-pitta-pat drums and Phil Free’s TV static guitar.

Long has there been the “I’m punker than you” strain in punk rock, and it likely started on side A of this record. “End Result” bent iconic Sex Pistol lines with Ignorant arguing that Crass were truly what the Sex Pistols (sort of) claimed to represent. Meanwhile, “Punk is Dead” found the band directly taking shots at Steve Jones and the Clash… even Patti Smith gets blasted for ripping off Arthur Rimbaud, he whose namesake Penny took for his own. Crass were taking no prisoners. And no doubt, the band was performing the healthy activity of questioning the punk icons- as Jello says, “Don’t just question authority, question everything!”

But, as the band ripped from 90 second slammer to 90 second slammer, ridiculing punk, the government, the Church, and the industrial military complex in equal measures, there does seem to be a certain sense of delight creeping through. As the band dismissed more standard nightclubs on “Banned from the Roxy,” it does seem that they had a certain pride in being too punk for the mainstream, too punk for the underground, and too punk for punk itself. Take “Sucks” for an example. Sure, they were blasting religious figures of all types, but they did seem to be having quite a bit of fun smashing up sacred symbols and watching the results of “squares.”

Perhaps most importantly, 5,000 introduced the concept that just as pop, the mainstream, and Callagan deserved scrutiny, so did punk itself. That is to say, a malevolent force masquerading as punk, but relay representing the claws of the mainstream could be a dangerous thing indeed, so Crass was there to not only root it out, but strengthen the ideals that were established… not by Sex Pistols, Clash, or the Ramones… but really, the hippie and Beatnick movements, which was now cloaking itself in denim, buttons, and yes, mullets. This dissection was a double edged sword. 5,000 played at least a significant force in demonstrating that punk music did not have to sound like traditional rock, and more directly, that just because something appeared to respect the ideals of the movement, it wasn’t necessarily so. While this greatly expanded the sonic and conceptual scope of punk, it also introduced decades of infighting and oneupmanship into the genre.

You could make the argument than in knocking the Clash and Sex Pistols off their stands, Crass forever made punk rock a competition among punks as to whom was the most punk. But, on the other hand, you very well could argue that Crass’ tactical strike is what expanded punk into a living, growing, changing force, instead of a flare up fad. Both arguments hold water, but weighing them together suggests that despite their disdain for religion, Crass were the saviors of punk (or at least one set of saviors) rather than the destroyers.

The Nipple Erectors: King of the Bop [7-inch]