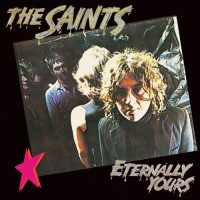 Brisbane, Australia in the 1970s had police corruption and inequality. This is where four people, inspired by the MC5 and stooges, came together and wrote songs about the political and social issues of where they lived. This is the second album by the Australian punk rock band "the saints". The first album by this band([I'm] stranded) was released a year before and was also a very well written album. It had lots of feedback and heavy guitar noise. (I'm) Stranded was an early punk record that had many of the sounds that people associate with punk rock(simple songs played loud and fast). However on Eternally Yours the band included many more sounds and styles. The band uses lots of horns and acoustic guitars, but the tempos are still fast and keeps a punk feel throughout most of the album.

These elements make this album probably one of the most unique punk records out there. The hooks are catchy and this album is so much fun . The guitars on this album change constantly, sometimes they sound crisp, eerie, or intense. The vocals on this album have this tough attitude and the singer experiments with backing vocals on songs(one example being the song Private Affair). The song (I'm) Misunderstood builds up at the end with incredible amount of excitement and energy. Other songs that do this are Run Down and Orstralia. God... I just love this album. Everything is just so perfect and I feel like this album isn't as recognized as it should be. I would highly recommend this album to anyone who is looking for a fun and unique punk album. If you want a good, heavy well written punk album, listen to their first album.

Elvis Costello and The Attractions: This Year's Model