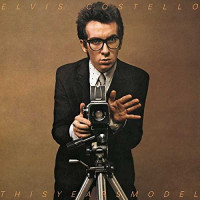 Elvis Costello and The Attractions

The monks were out selling peace, I was on my way to get my nails done, and with those words started Costello’s seminal 1978 album. These words had been my alarm clock for some months of my life, at a point; an unconscious reminder that some guy I’ve tried texting wasn’t interested in me. He wasn’t a telephone junkie - he got no action from picking up his phone.

This album had a beat that kept you in time. You could notice it by the drum intro of This Years Girl. By the time my feet hit the water in the nail salon for a pedicure, the beat kept the rhythm of my life. I began to relax into the worn out massage chair as an organ kept off-time. Magazines littered my view of beautiful women in Hollywood.

Were these the women Costello talked about when he spat, “You think you all own little pieces of this years girl?” Or was he talking about girls like me - getting manicured and waxed for the weekend?

While the instrumentation always felt like a strut on the street for me, Costello always intended for the song to be a call-out to men for treating women as objects to fill their expectations and desires.

As the beat pulsed on, the album moved to an aptly named song The Beat.

“We’re all going on a summer holiday,” Costello reminded me, and it was true. I wasn’t getting my nails done for just any weekend, this was in preparation for my first vacation of the summer. In less than 6 hours, I would in Vegas with a hoard of punks to wreck ourselves for one of the biggest punk fests of the country.

Promptly after The Beat ended, my toes were dry and my nails were next. The friendly nail tech instructed me to remove my headphones and move on.

It wasn’t until I sat down in my cozy coach airplane seat that I could finally stuff my ears with my shitty headphones and return to he world of Elvis Costello’s 1978 This Years model. The bass came steady and the guitar oozed in.

Costello was the king of innuendos. This showed best in one of his most well known songs, Pump It Up. Geared up and ready to go to the entertainment capital, this song was the instrumentation pre-party. But for Costello this was all wordplay. Sexual frustration and tension was Costello’s true intentions of this high energy banger. The bass and organ played with each other like a tango of two individuals; always walked close to the line but never touched.

“Don’t really need it,” he reminded himself.

Costello could pump you up and bring you back down. The first ballad-esque song of the record, Little Triggers, brought the emotions and tone down - like a crash from an amphetamine high. For the first time, a piano is introduced into the album to dance alongside Costello’s playful guitar. If No Action was his unrequited feelings to a girl on the other end of the phone, No Triggers was Costello getting a taste of his own medicine.

“I don’t wanna be hung up, strung up, when you don’t call,” he moaned.

Costello dropped all innuendos and stated how he felt. All the little things that could trigger sexual feelings. While Pump It Up psyched me out for Vegas, Little Triggers worried me. The Strip was ripe with scantily clad women and exotic dance clubs. All those little things that made me yearn for a woman’s touch would be thrown in my face in a matter of hours. In a city with the tag line “What Happens in Vegas, stays in Vegas,” Costello warned of such feelings.

“Worrying about the consequences. Waiting until I come to my senses.”

Luckily, Costello didn’t let me stew in this emotional state for long. He brought it right back up with You Belong to Me. Unfortunately, Costello was being interrupted by the four young, loud, and obnoxious normies around me. They were headed to Vegas to celebrate one of their birthdays. The girls giggled, gave me and my friend dirty looks, and talked about how great 13 Reasons Why was. They didn’t appreciate my punk aesthetic, my friends humor, or our complete distaste - and the sardonic, sarcastic remarks - for their lifestyle.

I closed my eyes and concentrated on Costello.

“I feel so left out,” squealed the girl in our aisle as she shot me a dirty look and reached to her three friends in the row in front of us.

“Don’t ask me to apologize,” whispered Costello into my ear, “I won’t ask you to forgive me. If I’m gonna go down, you’re gonna come with me.”

Back to a steady beat, Hand in Hand brought me into Costello’s world again. I fell in my seat further with each snare hit. The light, higher octave organ drew me closer to 1978 and away from the giddy bachelorettes. Costello repeated himself like a broken record, maybe even, a broken promise.

An airplane was not the proper setting to listen to the next song. I wanted to strut down the street of the strip listening to a song like (I Don’t Wanna Go to) Chelsea. Here the organ became an eerie warning, but the drums drove the bass towards that walking rhythm.

“She’s last years model. They call her Natasha but she looks like Elsie,” Costello could really throw shade.

While this song always had dark undertones, being a critique of the London prostitution, I’ve always enjoyed the line, “but there’s no place here for the miniskirt waddle.” I thought about my own items packed, recounting just how many miniskirts I had packed and the amount of waddling I would be doing myself up and down Fremont street.

But my thoughts were abruptly interrupted. The party girl in our row began to loudly complain about feeling left out of the girls’ vacation - one that yet to even begin, her friend reminded her. As they cat fought through the seats, I glanced over at my friends screen. He had been watching Schindler’s List and I found myself engrossed in a scene of children being carted away to their death.

I decided to save the rest of Costello for a better time.

Once we landed and partied for a night, I found myself unable to sleep the next morning. Since everyone I was bunking with was still stuck in a hard sleep that I envied, I slunk downstairs to the pool and made that my office. And what a great start to my day.

I picked up where I left off, Lip Service. I’ve always loved this track, as it’s the only song on the album with a clap track. It brought back the steady beat for that strut that Costello loved to walk. People meandered about the pool, unknowingly stomping to the beat Costello crooned into my ears.

“You better not do anything reckless,” Costello warned me. It was a warning too late. Vegas was the capital of recklessness. The hoard of punks here for the weekend were surely looking to do exactly that. But at least we were Living in Paradise while doing it.

Costello reminded me, “Here we are living in paradise. Living in luxury. The thrill is here but it won’t last long.”

As beautiful attendants walked around in lifeguard attire to take your drink orders, Costello talked about the jealousy he felt seeing men ogle at his woman. It was easy to steal a glance as they walked by and hard not to stare.

“I don’t like those other guys looking at your curves,” moaned Costello.

As the meander-strut of Living in Paradise faded out, I was suddenly struck with anxiety. Lipstick Vogue had the beat my brain taps to when the caffeine hits in. I sipped on my XL Starbucks cold brew as I lounged in my pool chair and listened to what Costello had to espouse. The bass rushed me like a mad coffee kick. I felt my hands shake and my eyes twitch. From my row amongst the beached punks, I could see the casino on the other side of the glass.

“Get to the slot machine - almost dead on arrival. Just hit me one more time with that live wire.” As the day truly began, more punks shuffled into the pool area. Nearly everyone had a hangover. I finished my coffee, thinking about how much money I had thrown into the slot machines. I thought about how that coffee would need a refill if I wanted to come around for round two of partying that night.

And then the music dropped.

The drums hit the floor toms to match the basses frantic feel. A piano comes in low on the high end. Costello whispers, “Select the control and then insert the token. You wanna throw me away but I'm not broken.”

Organs suddenly blared into my brain. Radio Radio’s bass thumped from the high frets to the low. My sunglasses reflected the suns glare this way and that as my head bobbed to and fro. Elvis Costello wrote a jammer that you could blast in a drop top car while riding through the sunny California mountains. But while Costello wrote driving instrumentation he penned dark lyrics about conformity, apathy, and giving a stiff finger to those that own the radio waves. The song was a warning and a plea.

But time has passed. Everywhere you walk in the hotel your indoctrinated with Pharrell’s Happy or other feel good radio hits, like Katy Perry’s Firework. No punk, no anti-authority. No modern day Sex Pistols or Elvia Costello.

“Some of my friends sit around every evening and they worry about the times ahead. But everybody else is overwhelmed by indifference and the promise of an early bed. You either shut up or get cut up. They don't wanna hear about it.”

With those words, a hard drum roll, and a finishing organ the album was finished. I unplugged from my phone, packed up my pool accessories, and got ready to see Marked Men on the Main Stage.

Radio Radio left me uncomfortable, though. As I passed the wave of punks coming from the pool or going towards to fest, I thought hard about what Costello had to say. Most punk bands today aren’t represented in mainstream culture, outside of the Avril Lavigne’s or Rise Against’s of this world. Costello wrote a scathing review of the radio treatment of punk musicians and 40 years later we’re less represented than ever.

The Adverts: Crossing the Red Sea with the Adverts