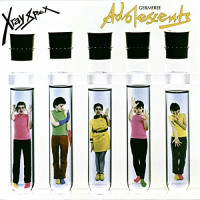 There’s a tendency to overlook X-Ray Spex in the history of punk. Some of the reason for that is how little material they put out, only a handful of singles and two albums released 17 years apart, mainly due to them being self-described “deliberate underachievers.” But if there’s one thing we learned from Operation Ivy, it’s how much influence you can have with even one single album. While X-Ray Spex’s 1995 reunion album is nothing to write home about, their debut album, Germfree Adolescents, is a flawless album and easily amongst the all-time greatest punk albums ever made.

Punk rock has always been largely a white boy’s game and, while they all spoke out about diversity and anti-racism, few had any people of color in the bands to back up their lyrics. The fact that X-Ray Spex’s lead singer, Poly Styrene, was a half Irish, half Somali woman in a largely white male scene is something I almost didn’t bring up as it’s not relevant to her being one of the greatest lead singers in the history of punk. But it is relevant to the unfortunate lack of racial diversity in punk that is only now beginning to be rectified. Styrene famously resented the tendency for the press to come to her for the “black perspective” on punk, as if that was her primary purpose in the scene.

Poly Styrene was always an eccentric character. Seen wearing bright Day-Glo colored clothing and braces during most of the band’s initial incarnation, Styrene firmly resisted being seen as a sex symbol in her band. She was quoted as saying: "I said that I wasn't a sex symbol and that if anybody tried to make me one I'd shave my head tomorrow.” Not one to make idle threats, she actually followed through with this and shaved her head in Johnny Rotten’s apartment one night before a show. In her songs, her voice varied between a shout and a shrill singing voice on songs like “Warrior in Woolworths” and the title track, “Germfree Adolescence.” Her voice bears a striking resemblance to that of Kathleen Hannah, one of the founding members of the Riot Grrl movement, which had been heavily influenced by X-Ray Spex, even though Styrene would always insist her lyrics were primarily anti-consumerist rather than feminist, even the band’s famous unladylike anthem “Oh Bondage, Up Yours!”

Of course, besides Poly Styrene, the most remarkable and idiosyncratic element of X-Ray Spex was always the addition of a saxophone to a punk band, which on Germfree Adolescents was played by Rudi Thomson, their third saxophone player. There’s a joyous element that the saxophone brings to the music. Downtown Boys, the modern successors to X-Ray Spex’s style and spirit, describe themselves as a “bilingual political sax dance party,” and they have a point that the rarely used saxophone really brings out the party element of punk music. When the first track of Germfree Adolescents, “Art-I-Ficial,” kicks off with its surf-punk vibe, the presence of the saxophone gives it an even greater energy than it already has.

A lot of times with some of the older punk bands, you find that they don’t distort their guitars or play as hard as what we’ve come to expect from modern punk bands, but X-Ray Spex are a definite exception to that rule. From the first to last track, Jack Airport slams that guitar hard, only letting up for the slower tracks “Warrior in Woolworths” and “Germfree Adolescents,” which both serve as a mellow palate cleanser to one furious hard rocking punk album. And of course, the album has what is certainly the best closing track of the early punk era, closing out on the classic “The Day the World Turned Day-Glo.”

If forced to come up with a criticism for this album, and that’s pretty hard to do, it’s that the band’s most famous song, “Oh Bondage, Up Yours!” is absent from the album, but of course subsequent deluxe editions have remedied that by throwing it on right after “Day-Glo.” (Although skip the 1991 reissue that throws in four singles not from the album and mixes up the order.) Sadly, the X-Ray Spex broke up in 1979, and Styrene went off and joined the Hare Krishnas, the Hindu-based religious sect that has been accused at times of being a cult. It’s unclear if she was still involved with the Krishnas in 1995 when she made the band’s reunion album, Conscious Consumer, but her experience in the Krishnas certainly shone through in the album, and its quality suffered because of it. Styrene died of breast cancer at age 53 in 2011, which was tragically too early, but she will always leave behind the legacy of one of the most phenomenal albums in punk history. And one that should never be glossed over.

The Adverts: Crossing the Red Sea with the Adverts