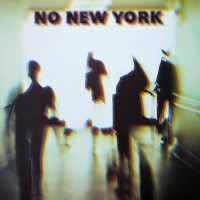 No Wave, at least in name, was a reaction against the new wave scene springing up across New York in the late 1970’s. Stylistically, it fell somewhere between The Monks’ 1966 garage/proto punk masterpiece Black Monk Time, Miles Davis’ Dark Magus, and any of the more unconventional titles in Captain Beefheart’s discography. While there were a number of bands involved in New York’s No Wave scene, only four different artists appeared on the 1978 compilation No New York.

The Contortions start this compilation off, and upon hearing them almost forty years later I can’t help but notice how current and vital this music still sounds. “Dish It Out” is a prime example, calling to mind bands the Cherubs or even Goat/Liar era Jesus Lizard. Everything about it is loud, aggressive, and raw. That doesn’t mean the song structure is completely thrown to the window, but everything about the music The Contortions played was a raw nerve with battery acid being poured over it. Much like many of the bands in the No Wave scene, this music was so primal all it was trying to do was survive, it didn’t need to be heard.

The next bands on the compilation, Teenage Jesus and The Jerks, likely features the most noted alum from this scene by way of Lydia Lunch. The band also shared a common member with The Contortions, in one James Chance. Ultimately, the music was nothing but a vehicle for Lydia Lunch’s lyrics and voice. If The Contortions sounded like a raw nerve with battery acid being poured onto it, then Teenage Jesus and The Jerks took those nerves, wove them together, and made guitar strings out of them. While song structure, and even knowledge of how to play your instrument, was less of a priority for The Jerks than their peers in The Contortions something about this is still very listenable. I think maybe, it’s that you can tell they weren’t faking it. Too often, you can hear adept musicians pretend like they don’t know what they’re doing. You don’t get that here, you get a genuine sense this band came together purely out of the need to create something that wasn’t there.

Mars, in nearly every way possible, reminded me of contemporary emocore/screamo … particularly bands like At The Drive in or Cursive but only on the first song, “Helen Fordsdale”. After that, the band drift in and out of noisy borderline psychedelic noise punk jams while lyrics are just shouted behind them. It’s certainly raw, rawer than the bands that preceded them, but it works. The guitar noise swells and drum patterns all blend together in an effective manner. Now, don’t confuse that with something you want to listen to, but there must be little music theory at work on these … whether intentional or not.

The final band on the compilation, D.N.A, has elements that could be found just a few short years later in bands like Big Black or the very early incarnations of Sonic Youth. It’s all still loud, atonal, and guitar strings are scraped as frequently as they’re picked. Some of this would change after the band appeared on this compilation and experienced some lineup changes. But, they come off sounding like wild, raw garage rock that isn’t afraid to fall flat on its face. And there’s a certain beauty in that.

While many bands in the New Wave scene deserve all the admiration and credit they got and continue to get, this compilation deserves more than it has. You can hear where Steve Albini got his guitar sound on here, you can hear the more experimental moments of Fugazi on here, the louder noisier moments of Cherubs albums and earlier Jesus Lizard. No Wave was a flash in the pan, musically speaking, but you can hear its influences today in many places. This compilation, is deserving of being called a classic. Not because you’re going to want to learn a guitar riff or because you’ll get the lyrics or vocal harmonies stuck in your heads for week. But, because this is primordial ooze that many of the bands we all adore today crawled out of.