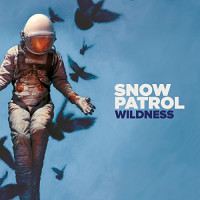 I decided to step out of my comfort zone musically for this review, so bare with me here. The first time I heard Snow Patrol was thanks to their most well known single “Chasing Cars” back in the early 2000’s. Since that time, the band has pretty much existed on the fringe of my awareness, until 2018 that is. Wildness popped into my musical library roughly a week ago, and I will admit, I enjoyed it.

Snow Patrol play a style of music that skirts between mainstream radio rock and indie rock, with a few nods to some underground influences here and there. While their success in Europe and the United Kingdom has remained consistent, their existence in North America has long since declined since the “Chasing Cars” days, but a devoted fan base remains. The new single “Empress” caught my attention, and the rest of the album followed suit.

Musically, Wildness is truer to form than I had expected it to be. Snow Patrol’s style has remained more or less consistent since 2006’s Eyes Open. Besides a few dance pop elements featured in the chorus of “Wild Horses”, the band offers up a record of consistent and memorable mainstream indie rock. The music is put together in a clever fashion, with catchy chorus lines, and well-written song structures that stray away from the repetitive drivel that bogs down most radio stations in 2018.

What I found to be the most engaging aspect of Wildness is the seamless way the band has captured the retro 90’s/2000’s rock and roll vibe. The band uses aspects of pop, grunge and indie rock, all of which transport the listener to sometime around 1997, which I mean in a positive way. The throwback theme is palpable these days, but Snow Patrol pull it off in a way that feels perfectly natural. That is to say, I do not think the band did this on purpose; it is just the way the songs came together. Wilderness could easily be comparable to mid 90’s releases from the likes of Gin Blossoms, The Goo Goo Dolls, Soul Asylum, and perhaps to a lesser extent even Nirvana (I know, I know, I’m treading dangerous territory here – forgive me).

Most importantly, the band really seems to be writing music for themselves. The song “Soon” is a heartfelt track about grief that feels almost as much like a eulogy as it does a song. The band knocked it out of the park in that respect, and it works. There is no pretention, no sleek over the top photos with bowties are to be found with Wildness - just consistent and enjoyable mainstream indie rock.

Camp Punk In Drublic: Day One: Live in Thornville

Svalbard: It's Hard to Have Hope