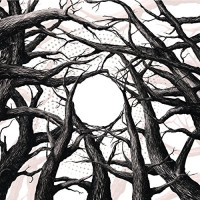 Time for another British band that (I suspect) haven’t really got much of a profile in the US or beyond yet. Svalbard, despite their Nordic-sounding name, are a Bristolian 4-piece post-metal band. Given the broadness of that term, I’d identify them as taking cues from melodic hardcore, post hardcore, emo and at times, black metal. The overall ambience created is often intense and quite all-consuming but feels emotionally wrought throughout, as opposed to being hammer-blow heavy.

Another thing that stands out with Svalbard is their subject matter and politics. These are, in the main, one and the same thing as the band wear their militant, liberal, bleeding hearts on their sleeves and don’t even bother with metaphor or simile in most cases. Song titles including “Feminazi?!”, “Unpaid Intern” and “Revenge Porn” show a will to capture the zeitgeist as well as a wish to address these issues head on. It is quite likely that some of the topics covered might not age too well given how current and possibly ephemeral they are, but I don’t believe Svalbard really care and listening to the record now, neither do I to be honest. The anguished cries of vocalists Serena Cherry and Liam Phelan (both also take on guitar duties) are bristling with righteous indignation and vitriol for the perpetrators of the social ills that the songs are aimed directly at. Because of this overtness, if you either disagree, or are the kind of person who prefers their music without such a strong political message front and centre, then you might struggle here.

However, I’m guessing that a decent percentage of the punknews readership are not entirely averse to political messages and a good fraction of those people are potentially left-leaning, so hopefully it won’t deter you - because this is a very good record. At 8 songs and 37 mins long, it does what it needs to do in the right sort of timeframe as well. That’s not to say I couldn’t listen to more of it - in fact, I’m left wanting more when it gets to the end of the record, which is always a good sign in my book. The rhythm section (Mark Lilley on drums and Adam Parrish on Bass) hold together the songs perfectly – Lilley’s drumming work especially bears closer attention – were it not for this, then there are points when some of the songs might otherwise feel slightly ramshackle, such is the urgency of Cherry and Phelan’s vocal and guitar delivery. But as a whole, and with the moments of quiet contemplation that are dotted throughout, the dynamics work brilliantly.

It probably bears mentioning that this is already the 4th release this year of extremely high-quality, thinking person’s heavy music on Holy Roar - following in the footsteps of Conjurer, Rolo Tomassi and Mol. There feels to be a genuine scene developing in this particular area and at this point, the majority of those artists are signed to Holy Roar. Also home to Employed To Serve - who won Kerrang Magazine’s Album of the Year last year with their stellar sophomore effort Warmth of a Dying Sun. And while there are occasional comparisons to be drawn within this stable of artists - they all have their own distinct sound. Svalbard’s is one that is infused with something approaching desperation. The songs often feel strained, almost to breaking point, with the potency of the songs being wrung out frantically, which makes for an exhilarating and occasionally exhausting listening experience, but in the best possible way.

But it’s not all vein-popping tempo and throat-shredding vocals. As mentioned briefly above, Svalbard also have subtlety to them when they choose to display it. Most tracks feature at least brief moments of respite, but some lean more heavily on the band’s more pensive side. Penultimate track Try Not to Die Until You’re Dead is considered, thoughtful and at times, genuinely beautiful - with reverb-laden guitar lines and arpeggios from high up the fretboard, not entirely unlike moments of Is Survived By-era Touché Amore. Album closer “lorek” continues in much the same vein, being an instrumental track, barely in excess of 2 minutes, which again showcases the shimmering, haunting and altogether less brutal aspect of the band.

On paper, some of this might sound a bit worthy, a bit over-thought, or even pretentious – but it doesn’t sound like it. I can only commend Svalbard for making a record that has genuine strength, purpose & political content, but that is also enthralling, fragile and surprising. Really brilliant stuff and on only their 2nd full-length, one can only imagine what’s yet to come.