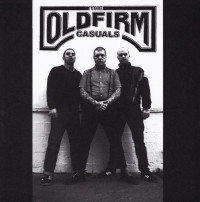 I’ve been slow to embrace the many Rancid side projects, but lately I’ve been reconsidering my position. Recent reissues of The Old Firm Casuals and Lars Frederiksen and the Bastards are the main reasons for taking a second listen. The Old Firm Casuals was originally released as a seven inch on Oi! The Boat Records back in 2011. It was four gritty, classic punk songs that would be the blueprint for everything else the band would do.

The punk rock and roll of “Old Firm (D.M.S.)” opens the EP and serves as a bit of a mission statement. “Casual” is the closer and completes the thought. Both songs are rough and tumble anthems and live staples. In between we get the driving “Lone Wolf” and “Apocalypse Coming”. The songs are a nice blend of classic Oi! and the band’s other influences with foot stomping beats and sing along choruses.

OFC weren’t really trying to break any new ground here, they were just trying to pay tribute to their influences and kick a little ass. In about ten minutes, that mission was accomplished. This new version is a heavy, clear, one sided, 45 RPM twelve inch. The other side is etched and it's a pleasure just to watch it spin. It also sounds amazing and jumps right out of the speakers. The Old Firm Casuals (2018) is both a great EP and a cool collectable.