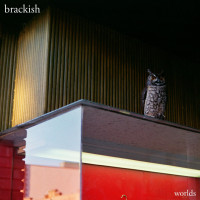 There’s a perennial debate around emo music centered on what characteristics constitute the genre and who excels at it. This debate tends to ebb and flow with the popularity of the genre. It also tends to fall on fault lines between some of the more traditional emo bands associated with origins of the genre and bands that have found mainstream success. Philadelphia’s Brackish straddle that fault line and offer a little bit for everybody.

Brackish’s new EP Worlds follows their Coming Down release, a harrowing collection of songs about heroin addiction and the fallout from it. If you search the archives of Philadelphia media outlets, you can piece together the tragic story behind Coming Down. Worlds feels like a continued exploration of strained relationships and how it has personally affected change within one’s self. Questions of personal worth, what friendship means, and moving forward in spite of tragedy abound on the EP’s five songs. “Salt” is a good example of this with lyrics like, “list of things to do / next to my list of things I enjoy / when I get around to them / I won’t be so annoyed / listing off the reasons you should stay / you should still be here for goodness sake.”

Worlds sounds like a band well versed in their regional scene and the history of the genre. They match some of the twinkling melodies most recently associated with emo while still hitting the discordant elements of the genre’s past. Closer “Rain” contains a half screamed and half sung outro over the band riffing out, mixing the heavy undertones with a drifting guitar line floating to the finish. “Think Twice,” one of the poppiest and catchiest songs on the album, and “Tricked” sounds like it could come from The Starting Line’s Based On A True Story. Hints of both Embrace and Jimmy Eat World are found within Worlds.

This release continues to show Brackish successfully exploring their chosen genre. There’s a wide spectrum of highs and lows on this well tracked EP and a natural progression from past releases.