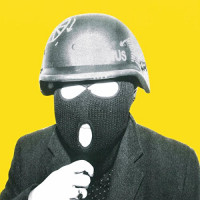 Protomartyr are here to soundtrack the summer of our discontent. Joe Casey brings his cynical carnival master bark as mordant commentary on our national predicament over a bed of ominous, scorching post punk. The band brings urgent consensus to Casey’s musings with the drums pounding out martial rhythms over bowling bass lines and wiry guitar webs. The group have enlisted the Breeders’ Kelley Deal to accentuate Casey’s clamor with her nonpareil, celestial backing vocals. This dose of bruising revolt results in a strong antidote to our collective liberal disgust.

“Wait” thunders with pounding toms and a nauseous guitar theme as Casey observes two men “punching the life out of each other” in an apparent “argument over aesthetics.” The chorus is a plea for reprieve and Casey repeating the request to “keep me above this filth.” “Same Face in a Different Mirror” finds Casey turning his ire inward as he reflects that his “ugly is intact” with his “guilt [crying] like an unfed pet.” However, despite the damning evidence against him, Casey notes that “there’s something coming up / The feeling there is love,” offering a rare glimpse of optimism that perhaps there is an escape to our personal and mutual hellscapes.

“Wheel of Fortune” is the centerpiece of the EP and the protest song needed for the tumultuous last 18 months of this disastrous administration. Joe Casey and Kelley Deal’s acerbic refrain of “I decide who lives and who dies” summarizes the hubris of each disruptive, damaging decision. Without explicitly naming his target, Casey annihilates “the asshole…[who] thinks he knows all the answers” and caters to his bloodthirsty base with “wrath for sale and it is always Christmas.” The whole cabal is ripe for disdain as Casey lambasts “inept government hacks [who] pump poison through pipes” and men “with a gun and a deluded sense of purpose.” With an eerie prescience, Casey also comments on the current immigration disaster, noting with a cautionary air that those who enter this diabolical “wheel of fortune” have a “chance of winning with proof of purchase” and derisively recognizing “chances are better with documentation.” We are in a tempestuous reality show being led by a man who has made his name with “a trick of heredity” and treats his detractors like “an angry ex-husband.” The next 30 months are looking grim, but who’s counting?

Finally, Casey and Deal end the EP with a reckoning with God, Death, time, or all three on “You Win Again” Over undulating bass and fluctuating guitar, he reckons with the future, lamenting that “I’ve lost all my keys / the lock has defeated me / You win again.” He disdainfully looks to a new reality of “fortified pills and milky tea” and cannot stand the thought of “restful days with polite company,” begging his intercessor to just “pull that sheet right over me.” As the breakdown continues, our narrator will “go grey,” “grow weak,” and “lose [his] way, but despite the realization that his adversary “always wins,” he ends on a defiant, insolent final note with “It’s a game I must play / It’s what I must do / So deal me in.”

The Brokedowns: Sick of Space