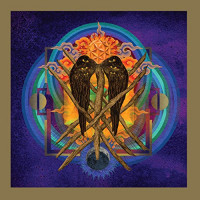 Doom titans YOB are back. Much to the delight of the doom metal trio’s committed fan base, it seems; And with good reason. It was altogether plausible that this record would never see the light of day. Or certainly not in the form that we see before us now. Sole remaining founder member and chief creator in the world of YOB, Mike Scheidt found himself staring into the abyss in early 2017 (in terms of mortality, as opposed to creativity). Scheidt suffered a severe attack of acute diverticulitis in January of last year which landed him in hospital and resulted in a number of surgeries, extended periods of extreme pain and even hallucinations. As he got his strength back, he was struck by a staph infection that also nearly killed him. Scheidt relied heavily on Buddhist mantras and meditation to get him through this horrific period of trauma and then, as a means of catharsis and coping – he set about writing Our Raw Heart.

It feels a fitting name for the album, which deals heavily with the concepts of mortality, existence and at times, despair. None of which are themes that doom as a genre has shied away from over the years, but what you might not expect (certainly not without knowing the backstory - as I didn’t when I started listening to the record) is the infusion of something akin to gratefulness that sits deep within the songs on the record. It’s most clearly exhibited in 15-minute epic “Beauty in Falling Leaves”. The title, as with the album’s title itself, lends itself really well to the ambience of the song, which is contemplative and strangely optimistic. Handled by another band, the background circumstances, and by extension the songs (as the 2 are so intrinsically linked) would have the potential for mawkishness, but that’s not something that would ever really be an issue with YOB - and the result is something quite remarkable. That is, if you’re willing to give yourself over to it as a musical experience as opposed to a collection of songs. If you do, then it really gives back a lot more than it takes.

Before I push on with the elements of the record that keep me coming back, I’ll spend a little time with the aspects that are less favourable. As much as all of the songs (7 of them) contribute something to the album and have their own distinct mood, as the album itself clocks in at a lengthy 1hr 13mins, this is by no means going to be for everyone. There are 2 tracks around the 15-minute mark, but strangely neither of these test my patience at all. Those 2 tracks - the title track, which also closes the album, and “Beauty in Falling Leaves” as mentioned above are both masterful examples of ethereal and uplifting doom metal, which until you hear them, that may sound like something of a contradiction in terms – but the beauty in the form of languorous melody that Scheidt is able wrench from such unlikely composite parts is incredible. The song that does feel more (dare I say it) arduous is second track “The Screen”. With it’s metronymic, plodding rhythm provided by both drums and muted strings, it does what (I suspect) it’s meant to – in conjuring a claustrophobic, fever-dream sense of creeping dread, but at almost 10 minutes long and without a huge amount of variation, it does drag more than the songs in the second half of the record.

But back to the good stuff – it would be remiss of me to not point out that Scheidt is on fine form, vocally. Changing lanes regularly and seamlessly from guttural anguish to Cornell-esque otherworldliness is not something that many people would have either the ability or the audacity to try, but Scheidt does it effortlessly, channelling the songs lyrics through his own organic filter and at times, the result is quite extraordinary.

It’s a slightly uncomfortable feeling, criticising this record when I consider what it’s borne of – but we have to accept that it’s not perfect. Frankly, to make a perfect album that is 73 minutes long would be damn near impossible – and I think the length and commitment to a slow burn approach will put some people off, but then at 8 albums deep into their career, I think YOB’s focus is probably not on bringing in hordes of new fans – yet ironically they may do just that on the strength of this record. At times it can be taxing, but at it’s best, it’s majestic.

The Brokedowns: Sick of Space