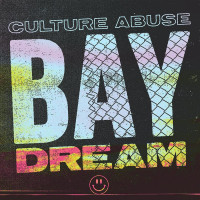 If there’s an appropriate image floating around the internet summing up the last couple of years, it’s the “This Is Fine” meme. Each day, the bottom falls out revealing some new atrocity humankind has brought on itself. There’s no blame to be cast for waking up only to decide your day is best spent pulling the covers over your head. Life’s already relentless malaise is continually on blast seemingly everywhere we look. That’s why Culture Abuse’s new album Bay Dream is one of the most enjoyable punk rock records released this year. It speaks to a feeling many of us probably have only found fleetingly lately; pure and unbridled joy in existence.

Culture Abuse’s Epitaph Records debut is endlessly positive. While some bands sing about the importance of P.M.A., Bay Dream is the embodiment of it. From the tie dye beach bum aesthetic on the cover to the cheery and acid washed production, this album feels like summer. It’s the summer feeling that comes with knowing school’s out forever, a chance at love is right around the corner, and a concrete belief that your future is unwritten and on your side. For a punk rock band, especially in such troubling times, to fully embrace positivity as the guiding light is quite the statement. Not only that, the album absolutely fucking slaps as well.

Bay Dream is a pop record at heart. Keyboards, sun drenched harmonies, and electronic flourishes abound throughout the album’s 32-minute run time. Singer David Kelling drops the distorted snarl found on Peach for a saccharine croon that radiates good vibes. If you’ve followed the release of one off songs from Culture Abuse upon signing with Epitaph in summer of 2017, this transition shouldn’t seem out of the blue as they’ve hinted at a shift in style during the leadup to this release. Bay Dream comes across as if the early 2000’s material from Sugar Ray wasn’t so gimmicky and lame. It leans towards the pop side of bands like Wavves, who were a recent collaborator with Culture Abuse.

The front half of the album contains one of the strongest run of songs released this year and many of its stand out tracks. “Rats In The Wall” is sprinkled with keyboards that wouldn’t sound out of place on an early Elvis Costello record. If there was any justice in this world, “Bee Kind To The Bugs,” an absolutely uplifting song about taking care of yourself (and bugs) through kindness, would be a hit on alternative rock radio. The verses in “Dip” are catchy enough to be the chorus encouraging you to not let life’s distractions swallow you. “S’Why” is a love song to friendship with Kelling singing “s’why I like you around / cause you make me feel good.” Not a moment of this comes across as forced or cheesy and that’s hard to deliver with lyrics like that.

If you’re looking for the party this year, Bay Dream is it. With this release, Culture Abuse succeed in growing their sound while not losing their heart along the way. In fact, not only did Culture Abuse not lose their heart, they are sharing that heart with anyone who will listen. This is fine, indeed.