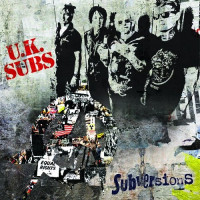 UK Subs are a great band with more than 40 years of history under their belt. They are wildly influential and one of punk’s founding fathers. They have certainly earned the right to do whatever the hell they want to. That being said, I wasn’t all that enthusiastic about the idea of them doing a covers album. These types of albums are usually either a cash grab, or a sign of a band running on empty creatively. Since there’s really not much cash in punk at this point, I guess we can rule that out. With countless releases to their credit, UK Subs can probably be forgiven for a creative dry spell. They have released an album starting with every letter of the alphabet, and dozens more. Ziezo (2016) was supposed to be their last full length, but this must not count because it’s not original material.

Since I’m the resident old man/classic punk fan, it was determined that I should give this a listen. Despite my reservations, I tried to do so with an open mind. I was pleasantly surprised by opener “Kick Out the Jams”. I love the MC5 original, and have heard this covered many times over the years. UK Subs definitely do it justice. Like most of the songs on SubVersions, it walks the line between punk and straight up hard rock. Their take on the old blues/jazz standard “Train Kept A Rollin” is far less inspired. Some of you may be familiar with the Aerosmith version, which like most Aerosmith songs is pretty terrible. “I Don’t Need No Doctor” is another old R&B song, and it once again doesn’t do much for me. “Boston Babies” by fellow late ‘70s UK punk band Slaughter and the Dogs is much better.

By this point a pattern is developing, at least in my head. I’m enjoyed hearing them cover their contemporaries, but not their influences. The truth is, frontman Charlie Harper is in his 70’s. His roots go all the way back to the earliest days of rock and roll. This trend of my preference continues. Their version of “Tired of Waking Up Tired” by The Diodes is probably the best song on the album. I must confess to not being familiar with The Diodes, but I’m definitely going to check them out. UK Subs also turn in a solid performance of The Saints’ “This Perfect Day”. “Bomber” by Motörhead, “Roadrunner” by The Modern Lovers and “1969” by The Stooges are all decent listening too.

Three of the songs are outliers, and I’m not sure what to make of them. The first is Bob Seger and the Silver Bullet Band’s “Get Out of Denver”. (Bob Seger is a Michigan icon. I have a brother-in-law who’s about ten years older than me. He used to listen to the Seven 8 track all the time. This was his favorite song from it.) The much newer “Feel Good Hit of the Summer” by Queens of the Stone Age also feels like a strange choice. “Suffragette City” by David Bowie wraps up this collection. While Bowie has been a huge influence on a bunch of different genres, it would have been nice to get a deeper cut. This song has been done to death. All three of these tracks are just OK.

We must take SubVersions for what it is, a decent collection of cover songs from an aging punk band. It’s good enough to do no harm to the band’s considerable legacy, but not good enough to add much to it. Ultimately, the world is a better place with UK Subs in it. I hope they continue to do whatever the hell they want.

Elway: For The Sake Of The Bit