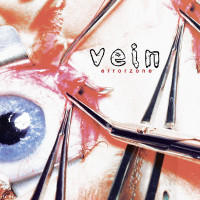 Nu-Core is here. Errorzone is the one album now to define this style and the best hardcore release of 2018.

There is no longwinded point to make. This band has been building up a cult fan base in the underground scene and this one album was arguably the most anticipated of 2018. There is a lot of hype here and gee-whiz it friggin’ PAID OFF!

There is not one bad track on this entire thing and the mixture of Hardcore and Nu-Metal is used brilliantly with a facet of digestible songs that make the listener craving for more. The song listing must have been a chore to work out because the flow is perfect and seems very calculated to make the listener immediately go nuts with excitement. Opener “Virus://Vibrance” is excellent and a showcase of all the bands immediate influences. As stated in the past, there are many acts Vein chose to take elements from and the end result is the best of the best from all. This one song is a smorgasbord of radical changeups and alt-filters with an energy that is just incredible. There hasn't been a Hardcore song this pummeling in a long time and it doesn't even need the usual elements (chugga chugga) to be good. It even has a neat use of the Amen Break!

Each cut on this thing is awesome, but some highlights to check out if you want a taste are songs, “Old Data in a Dead Machine”, “Anesthesia”, “Untitled”, “Doomtech” and the title track "Errorzone"..

This is also an album where the second half is even better than the first, which is a rarity in a lot of cases. The songs begin to open up more and you get some little hints of softer parts and atmospheric mid-song instrumentals. “Untitled” has some Deftones tinges with soft singing that sounds filtered through an old PC, and "Doomtech", which is arguably the album highlight, ends with an epic finale that strikes the madness of the lyrical content in thematic chaos. But my personal pick is the title track "Errorzone" because it goes for a bit of emotional Screamo near the end  which sounds almost like Glassjaw or From Autumn to Ashes perhaps. You could probably name tons more bands that sound familiar, but you get the gist. It's a member berry of a song.

Again, there is a lot going on here, but the immediacy of the music presents itself as something unique and refreshing in a scene that had almost become stale once more. Vein are the ones now to carry the torch and showcase their brave cause to make interesting music again and Errorzone will not be forgotten for a long time.

This is just the start folks…