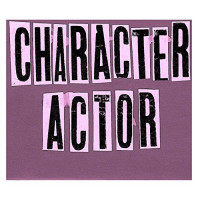 Sometimes a genre band is all you need. Such is the case for New Jersey’s Character Actor, a group of musicians who recorded this EP as a result of proximity and friendship. And that’s exactly what it sounds like.

Character Actor is Jeff Schroeck from The Ergs! and Black Wine, Brian Gorsegner from Night Birds and Evan Kiel. And you know what? This self-titled EP sounds like those guys made a band together, skewing more towards Night Birds' aggression. The four songs don’t do anything particularly new and that’s perfectly okay.

The first three songs come and go quickly. “What I Learned From Righteous Cowboys” takes place in under a minute. This contrasts the last track, “72 Paperbacks,” the longest of the set at just under three minutes. Unfortunately, it’s also the slowest and weakest. These three guys are at their best when they’re doing straightforward aggressive pop punk.

The self-titled EP ultimately gives you nothing new but it’s a fun listen for any fans of the gentlemen’s other bands.