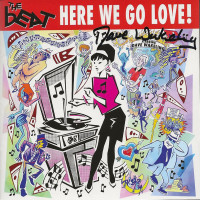 A long time ago, I declared “Save it for Later” to be the official song of my birthday. You see, when I was a kid, the local radio station had been giving a very small amount of airtime to the Harvey Danger cover of “Save it for Later” from the soundtrack to 200 Cigarettes. Despite the fact that the radio station barely played the song, I fell for its sugary, infectious melodies and begged my parents for the 200 Cigarettes soundtrack for my birthday, not knowing it was a cover. Ever since then, it has been the song I most associate with my birthday, so I really love it. As I got older and came to realize that it wasn’t a Harvey Danger original, I started to look into the band that originally wrote the song. And, while I still believe Harvey Danger’s cover of “Save it for Later” is better than the original (I’ll fight you on that), I love those first three albums from The English Beat (or just The Beat if you’re in the UK, or The British Beat if you’re in Australia and have to be different).

The English Beat were by far the best of the two-tone era ska bands, primarily because they refused to stick to just straight up two-tone. They weren’t afraid to incorporate elements of punk, new wave, even classical and polka into their ska songs. Neither were they afraid to tun off the ska for a song or two and put out something completely outside of their normal genre. The fact that they only ever got to put out three albums before breaking up is a shame, because I think there was a lot more that could have been done with that level of talent.

So once I figured out that this wasn’t the true English Beat but merely one half of a Gene Loves Jezebel-style split in two, I went into the album expecting a desperate grasp at a fleeting fame long since past that would just make me feel sorry for Wakeling. It was probably because of the fact that my expectations were so low that I enjoyed the album as much as I did. The album does have all the things I mentioned above: a powerful ska game, the ability to mix ska with other genres, and the ability to put the ska on pause from time to time to make a non-ska song. The overall quality varies from song to song, though, and is far more uneven than any of the original three English Beat albums. Several of the songs on the album, including “Redemption Time,” “Every Time You Told Me,” and “Be There for You” feel like they were artificially extended to make them longer than they were originally intended to be by filling up time with completely unnecessary solos, almost as if the early demos together made for an album shorter than someone wanted it to be and the songs were stretched to add time. “If Killing Worked,” a sugary-sweet pop-ska tune with the chorus “If killing worked it would have worked by now,” certainly expresses a sentiment that I agree with, but one stated in such an over simplistic manor as to feel insulting to my intelligence.

On the plus side, lead single and opening track “How Can You Stand There?” is a taught ska-rocker that remains ambiguous as to whether it’s talking about dancing or getting involved in politics, and seems to be happy to sit in that ambiguity. “Never Die,” a ska-less string instrument led ballad about a friend passing away is by far the most emotionally moving track on the entire album, and it amazingly manages to close the track out on a very upbeat note despite the song’s sad content. “Dem Call it Ska” is a fun tribute to the genre itself, even if it is a little wince worthy to hear white dude Dave Wakeling say “dem” like he’s Jamaican.

In preparing for this review, I also took a listen to Bounce, the album by The New English Beat Featuring Ranking Roger from 2016. A lot of the positive things I said about Here We Go Love can also be said about Bounce. Both albums were better than I expected them to be. Both albums contain all the elements I listed above that I think really made the original English Beat great. Both are heavily flawed and not as good as the original English Beat albums, but I still recommend both of them. But I can’t really listen to either album without feeling like I’m listening to one half of a whole, and that I’d much rather be listening to those two halves put back together again. I’d much rather hear an English Beat that has both Dave Wakeling and Ranking Roger in it, and, if possible, some of the other original members of the band. But until the day if and when we can actually see a band like that, Here We Go Love and Bounce are decent albums that aren’t as good as the English Beat of old, but are good enough to not be insulting to the English Beat’s legacy.