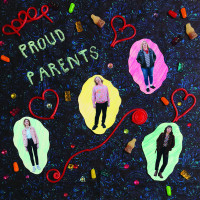 Proud Parents are a relatively new band hailing from Madison, Wisconsin. Their debut on Dirtnap Records marks their first official LP after a handful of tapes started to gain traction in the local indie scene. The lineup has grown from a two-piece jamming in the living room to a full-fledged band with three vocalists over their few years of existence. Proud Parents combines lo-fi production and a knack for writing earworms that are in one ear and out the other before you realize you are onto the next song.

The core of this album is quirky pop songs. There’s a youthful bliss that underlines the songs on Proud Parents and a growing awareness that comes with finding out that bliss is fleeting. The eponymous album opens up with an eponymous track that gives a wink and nod to their name with lines like, “I’m not proud of everything I’ve done / but I’ve come to accept how far I’ve come” and “I am so proud of you, it’s true / and you should be proud of you too.” The song has co-vocalists trading off lines about successes and regrets. The album closes out with a slower, slightly more jangly version of the song.

One of the highlights of Proud Parents is the eccentric little guitar leads that find their way into songs. “Stuck” is a good example of this with the lead connecting choruses about being stuck in a rut. There are times when the album comes close to early Best Coast material with songs like “Baby” and “Happy.” Radiator Hospital is another good reference point for Proud Parents. Other highlights include “Ducktales,” a lament about aging out of your teenage years, and “Flavordust,” a rumination about feeling directionless.

This is an enjoyable debut from Proud Parents. Like any band’s first release, there are a couple of half-baked ideas and the lo-fi production can feel like a bit of mess jumbling contrasting bass and guitar lines in loud cymbal splashes, but this shouldn’t prevent anyone who is a fan of garage-based indie pop from checking out Proud Parents.

Dead To Me / DFMK: Live in Lancaster