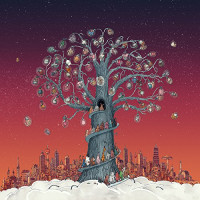 I've made this statement multiple times reviewing Dance Gavin Dance at the org: I've been a huge fan since the Jonny Craig era and well, they're a guilty pleasure, so sue me. With that out the way, I'll admit I'm still warming up to Tilian Pearson, especially after his switch-in came when Kurt Travis had finally found his groove on vocals, but still, I gave him a chance. And every record with DGD, as usual I come in with high hopes. Artificial Selection though quickly stomps on them, once more painting the new era of DGD as bland, formulaic act and something that'll probably wish Warped Tour comes back on-stream in the near future.

Since Tilian took over, there's been something so generic with their style of prog/post-rock. Tree Sessions I enjoyed but while the band has maintained a somewhat aggressive aura, it lacks the magic found on Downtown Battle Mountain and the self-titled. I mean, there's a bit of this in "Care" with its funky riffs, "Count Bassy" which has a well-orchestrated metalcore feel to it and "Flash" which feels like an ode to the runs with Jonny. But other than that, there are just too many tracks on the 14-song record that feel like they need fast-forwarding.

"Shelf" more or less sums up how disappointing things are here because it has Tilian's backdrop of Tides of Man with Kurt himself doing guest vocals, with a style akin to A Lot Like Birds (Kurt's latest band) flavoring the mix. Seriously, it's so disjointed it feels like a fan mashup on the 'tube. That said, I really have to make it clear that this album feels like the jumping-off point for me. I've given them a lot of chances but DGD -- even with Jon Mess' sick screamo vocals and Zac Garren coming back to riff with Will Swan -- feel like they're phoning it in. Oh well, twas a good ride while it lasted. Hopefully, they recapture that vibe of old, but I won't be holding my breath for it to happen.