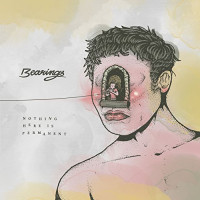 Bearings are a 4-piece pop-punk band from Ottawa, Ontario, Canada. Nothing Here is Permanent is a 5 song EP, and the band's debut release for California's Pure Noise Records. Bearings sound moves towards the mainstream element of pop punk, but there are some 90’s emo influences thrown into the mix for good measure.

I was pleasantly surprised with Nothing Here is Permanent; the songs are catchy and significantly more memorable than other mainstream pop-punk currently coming out of Canada, or North America in general for that matter. The musicians are capable and the vocals are crisp and nostalgic, Bearings sound would feel at home on the roster of 2001 era Victory Records or Fuelled By Ramen. The mid-tempo emo vibe found within Nothing Here is Permanent aids in distinguishing the band from getting lost in the sea of contemporary pop-punk records no one asked for in 2018.

The songs are catchy, particularly album opener “Petrichor”, but the record itself lacks lyrical and emotional substance. The lyrics themselves blend into the typical pop-punk territory, and refrain from being offensively cheesy, but miss the mark in terms of depth and legitimate substance the listener can grasp onto. What the band loses in substance they gain back with the well placed vocal harmonies that are found throughout the record.

At the end of the day, if you are familiar with the past Pure Noise Records catalogue there are no real surprises here. Bearings avoid the overtly cheesy and auto-tuned pitfalls of most contemporary mainstream pop-punk.The well written harmonies mixed with some matured writing could bring good things for this young band in the future.