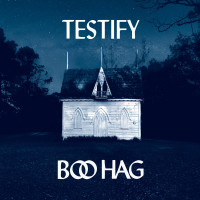 A warm, Southern summer’s night katydid chorus is quickly overtaken by pounding drums on the opener to Testify, the new EP from dark South Carolina duo Boo Hag. The group is comprised of Columbia, SC transplant Saul Seibert, who spent some of his youth in Galesburg, IL and New Orleans before arriving in the Palmetto state. Holding down the drums is Scott E. Tempo whose percussive expressions range from a calm twilight backbeat to a thunderstorm maelstrom. Testify finds the group arriving with a completely intact, intoxicating aesthetic. Haunting hollow body guitar, barely decipherable distorted vocals, and muscular drumming conjure the disconcerting atmosphere of an inky black night in an abandoned church in the backwoods of South Carolina.

The term “boo hag” references a vampiric creature from South Carolina Gullah folklore who rides atop a sleeping victim, feeding off their breath and inducing a deep, dreamlike sleep (the final track on Testify, “Boo Hag” is an ominous spoken word dirge recounting the myth). In my mind, I keep picturing the Baba Yaga from Hellboy, complete with chicken leg house. Boo Hag’s previous releases were slices of macabre garage rock colliding with voodoo and Creole lore; just imagine the Cramps arising from the swamps of the Santee River. However, on Testify the band begins to take an evolutionary step toward a type of Southern Gothic gospel that is unsure whether to wade in the dark waters or race through the woods praying for the morning light. This new distortion of the gospel music tradition shares a vision of the Savior that Flannery O’Connor termed “the Christ-haunted South.” O’Connor argues that the South is not necessarily Christ-centered (despite the overload of self-professed evangelical Republicans) but that the specter of Christ haunts most aspects of our culture.

Boo Hag have acknowledged the phantasmal undercurrent in Southern spirituality. Testify plays like one extended dark night of the soul with the tension of struggle between divine redemption and tantalizing damnation buttressed by the sounds of a Carolina thunderstorm. Consider it an authentic reflection of the dark Americana Nick Cave has spent part of his career attempting to tap into from across the Pacific Ocean. Regarding the creation of Testify’s sinister mood, just as important as the notes Seibert plays are the spaces he leaves between as his hollow body guitar’s reverb allows struck notes to linger in the air. The band incorporates field recordings to conjure and enhance the atmospherics for these haunting tracks and subvert and distort the subject matter of traditional gospel music. “Sacrifice” calls out to Joseph’s dreams and Moses’s burning bush to remind people of the life-altering experience of finding “faith in the thing I see.” The plot of Testify manifests with the field recordings, which become just as essential as the instrumentation in establishing the power of these diabolical hymns. The crickets of “Sacrifice” and “Crown” lead to a full-fledged storm in “Death.” The ominous evening is broken by the early morning birds of “Cisterns” and the street preaching of “Foundation.”

“Foundation” is the lynchpin in this set as Seibert is approached by a Chapel Hill street minister and admits he’s not a good person and unsure of God’s existence. As the preaching and prayer recede and a field recording of waves breaking washes in, Seibert and Tempo escalate the melodrama using the analogy of houses on sand versus stone by defiantly declaring “my house will stay strong.” However, the true outcome of Seibert’s doubt is thrown back into sharp relief in follow-up “Seven” as that night time storm has returned, and Seibert finds himself “in a furnace blazing fire” with the Messiah. It is unclear if Seibert is being redeemed from the fire with Shadrach, Meshach, and Abednego or if he is being tormented from the flames down below.

Boo Hag have created an excellent fusion of genres that subvert Southern spiritual identity and experience without being self-consciously anachronistic. The lyrics are straightforward, from-the-gut and never overwrought. They are a band on the brink of something classic. Here’s hoping the tension between the influences of the light and the dark continue to inspire and move the band to higher ground.